Back in 2014 Obama promised that as part of the US war against ISIS, there would be “no ground troops in Iraq.” Moments ago U.S. Defense Secretary Ash Carter gave the latest confirmation that Obama was not being exactly “honest”, when during a visit to Baghdad in which he met U.S. commanders, Iraqi Prime Minister Haider al-Abadi, and Iraqi Defence Minister Khaled al-Obeidi, he announced that the US would send another 200 additional troops, raising the number of U.S. troops in Iraq to about 4,100.

This follows a report two weeks ago according to which the US would “greatly increase” the number of special forces deployed to Syria under the same pretext: to fight the same Islamic State, which only exists due to a CIA operation to destabilize and overthrow Assad’s regime in Syria. 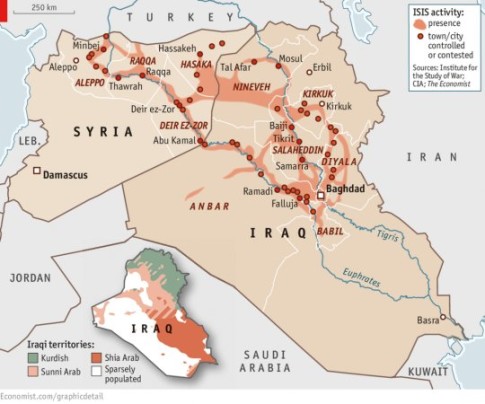 To be sure, the incremental deployment to Iraq is not exactly surprising: at the end of March, the Daily Beast reported that as many as 21 generals have been deployed (to a war the US denies fighting). More:

There are at least 12 U.S. generals in Iraq, a stunningly high number for a war that, if you believe the White House talking points, doesn’t involve American troops in combat. And that number is, if anything, a conservative estimate, not taking into account the flag officers running the U.S. air war, the admirals helping wage the war from the sea, or their superiors back at the Pentagon.

At U.S. headquarters inside Baghdad’s fortified Green Zone, even majors and colonels frequently find themselves saluting superiors at a pace that outranks the Pentagon and certainly any normal military installation. With about 5,000 troops deployed to Iraq and Syria ISIS war, that means there’s a general for every 416 troops, give or take. To compare, there are some captains in the U.S. Army in charge of that many people.

But if the U.S. footprint is so small, why does the war demand so many generals?

This was our response on April 3: “Why so many generals to so few troops? Perhaps because, just like the Syrian “special forces” reinforcements, the U.S. troops are about to be deployed in Iraq as well where they will have more than enough generals to guide them.”

Sure enough, this is precisely what happened.

However, it’s not just troops: as Pentagon spokesman Peter Cook says in tweet, the DOD also announced the authority to employ AH-64 Apache helicopters in support
of operations to retake the city of Mosul in Iraq.  DOD also will provide additional advisers, more financial aid and firepower.

And then there is the money: “To accelerate momentum” in fight against Islamic State, Defense Sec
Ashton Carter “says we will provide up to $415MM in financial assistance
to Peshmerga fighters,” Cook says in a tweet.

And, once again, as we asked rhetorically in April 3, all this begs the question: “as the ongoing proxy war in the Middle East has been gradually pushed back from the front pages, are all these stealthy reinforcements indicative that something far bigger is about to be unleashed in the region.”

This indeed appears to be the case: on Friday Reuters reported that Iranian Major General Qassem Soleimani had flown to Moscow for talks with Russia’s military and political leadership on Syria and deliveries of Russian missiles, sources said on Friday. Soleimani met Russian President Vladimir Putin and Defence Minister Sergei Shoigu on Friday, one source said.

The main purpose of his visit was to discuss new delivery routes for shipments of Russian S-300 surface-to-air missile systems, sources said. Several sources also said Soleimani wanted to talk about how Russia and Iran could help the Syrian government take back full control of the city of Aleppo.

That is hardly all he is doing in Moscow: as a reminder, Soleimani, the commander of foreign operations for Iran’s elite Revolutionary Guards, flew to Moscow in July last year to help Russia plan its military intervention in Syria and forge an Iranian-Russian alliance to support Syria’s President Bashar al-Assad.

We are confident he is doing the same now, and with the US deploying ever more troops to the region, it is only a matter of time before Russia once again reciprocates.