Vienna is throwing away every day as much bread as is consumed by the entire city of Salzburg on a daily basis. 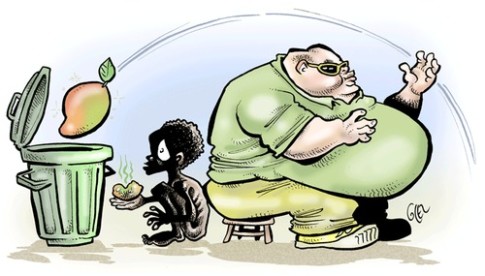 – Global Food Waste: The Numbers Behind The Problem:

If the amount of food wasted around the world were reduced by 25%, there would be enough food to feed everyone who is malnourished.

Each year, 1.3 billion tons of food, or about a third of what is produced is wasted in one way or another.

Almost half of all fruit and vegetables, 35% of fish and seafood, 30% of cereals, 20% of dairy products and 20% of meat is wasted planet wide.

In developed countries, consumers and retailers throw away between 30% and 40% of all food purchased. In contrast, in poorer countries, only 5% to 16% of food is thrown away.

In Europe and North America, each person wastes between 95 and 115 kilograms of otherwise edible food annually, whereas in sub-Saharan Africa, South America and southeast Asia the equivalent waste is of only 6 to 11 kilograms.

Industrialized countries throw away 222 million tons of food a year, which is slightly less than what the entire sub-Saharan Africa region produces over the same time frame. (230 million tons).

The environmental impact of food loss and waste is enormous. Those who are concerned about carbon footprints must know that the impact of food that is produced but not eaten reaches 3.3 gigatones of CO2 emissions per year.

If food waste were a country, it would rank as the third highest emitter of greenhouse gases after the United States and China.

Roughly 1.4 billion hectares, or about 30% of the available agricultural land worldwide, is used to produce food that is ultimately wasted. In the United States, Canada, Australia and New Zealand, about 39% of the food is wasted in one way or another. In Europe it is a little less: 31%.

The United Kingdom does not escape the type the food waste problem either. Around 15 million tons of food are wasted every year. In total, 4.3 million tons of edible food is thrown away every year. Almost 12% of all food wasted is avoidable, but people do not pay attention to this reality. In fact, they don’t even realize how much money they are throwing out of the window.

Food waste in the UK costs families an estimated 700 pounds per year, or an average of 60 pounds a day. The most wasted food per weight is bread, which stands at 22%. Around 24 million slices of bread are thrown out a day in the UK.

Those of you concerned with global warming, check this out: Food that goes to the landfills breaks down anaerobically and produces methane, which is 21 times more potent as a greenhouse gas than CO2. According to the Waste & Resources Action Program, every ton of food that is wasted results in 3.8 tons of gas emissions.

So what is humanity to do about food waste?

When we’re finishing up a delicious home cooked meal, we often take our plates over to the bin and scrape away the leftovers without giving it a moment’s thought. If it’s not enough to warrant another serving, why keep it? This casual disposal of leftover is common throughout the UK and countless other countries, but what impact might this small act be having on the problem of global food waste?

The figures above aren’t just alarming, they’re staggering. Throwing away food is something that we all do subconsciously every day, and while we can take steps to shop more responsibly and cook smaller portions, a little bit of waste at the end of the day is almost inescapable at times – particularly if you’re cooking for a big family. What you can control, however, is how that waste is managed. Imagine the good you could do with just a small change to how you disposed of your leftover food…

Even if it doesn’t go directly to hungry mouths, it still doesn’t have to end up decomposing in a landfill site adding to the harmful gasses in our atmosphere. Waste food can be recycled in other ways, from being used as fertiliser to being used as a direct power source, when it’s disposed of in the right way.

Now, picture how easy it would be to make a difference if you had the ability to dispose of your food in this way directly from your home. It would mean less waste to get taken off to landfill, and you’ll have an odour-free, hygienically clean kitchen without worrying about yesterday evening’s leftovers sitting in your bin. If it sounds too good to be true, it isn’t. We simply need to think differently about the amount of waste we produce, and how to better manage it from day-to-day.

Here are five alternatives to deal with food waste:

“You mean we don’t need a cull after all?
Was it all a Rothschild/Rockerfeller PLOT?
So why have Agenda 21 & 30?”

1 thought on “Global Food Waste: The Numbers Behind The Problem”