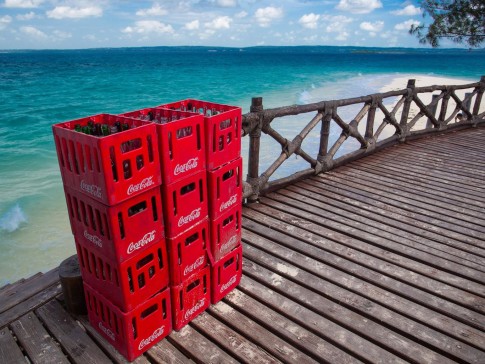 The 50 biggest US companies have more money stashed offshore than the entire GDP of Spain, Mexico or Australia, collectively keeping about $1.3trn (£0.91trn) in territories where the money does not count towards US tax, according to a new report by Oxfam.

The revelations come after the European Commission announced plans to make big companies more transparent about where they pay tax.

The charity said the Commission’s proposals are “almost useless” for identifying where tax avoidance may be happening. It urged the UK Government to push for stronger rules to ensure that companies pay tax in all countries where they do business. 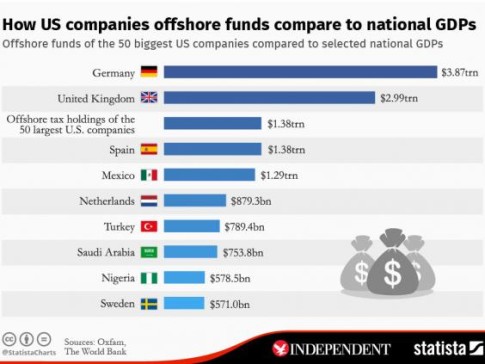 Robbie Silverman, Senior Tax Advisor at Oxfam, said that tax avoidance in the US will have a knock-on effect in countries around the world.

“The same tricks and tools used by multinational companies to dodge tax in the US are being used to cheat countries across the world out of their fair share of tax revenues, with devastating consequences,” he said.

“Poor countries are particularly hard hit, losing an estimated $100bn a year to corporate tax dodgers. This is enough to provide safe water and sanitation to more than 2.2 billion people,” he added.

In its investigation into the US tax system, Oxfam revealed some of the offshore accounting practices of the biggest companies in the US. Fifty companies including Coca-Cola, Walt Disney, Alphabet (Google) and Goldman Sachs keep a total of about $1.3trn in subsidiary companies registered all over the world, Oxfam says.

The Independent has contacted the companies named above for comment. Goldman Sachs declined to comment, the others did not respond.

The 50 companies are believed to have earned $4trn in profits globally from 2008-2014, but paid only 26.5 per cent of this in tax in the US, below the country’s statutory tax rate of 35 per cent. They rely on an opaque and secretive network of more than 1,600 disclosed subsidiaries in tax havens to stash about $1.3trn offshore, Oxfam said. It added that other offshore subsidiaries may be in use but under the radar of the Securities and Exchange Commission, because of weak reporting requirements.

These same 50 companies collectively received $27 in federal aid-like loans, loan guarantees and bailouts for every $1 they paid in federal taxes, amounting to a total of $11.2 trillion, Oxfam said.

Charities including Oxfam and Christian Aid have dismissed European Commission proposals to crack down on tax dodging as “close to pointless”. Christian Aid said new rules would allow “dodgy business as usual”.

Under EC proposals, companies would have to report profits and pay taxes in the EU and certain so-far undisclosed tax havens.While campaigners have lobbied for country-by-country reporting of taxes and profits, the proposed versions is so limited that it would not do the job, charities say.

“Unless companies have to report on their activities in all the countries where they operate, they could continue to dodge tax on a massive scale, using the places still hidden from view,” said Toby Quantrill, Chrisian Aid’s tax justice expert.

Campaigners have long asked for country-by-country reporting of tax affairs but the latest EC proposals are only a limited version of the rule. A previous tax haven blacklist put together by the European Commission in 2015 was withdrawn after it failed to include key countries like Luxembourg.

The latest European Commission proposals come in the wake of a huge data leak from a law firm in Panama that provided evidence of the true scale of offshore banking by the world’s super rich, including many current and former world leaders. Oxfam described the exploitation of tax loopholes as an “integral component” of the profit-making strategies of many multinational corporations.

Tax avoidance comes in many forms. Companies have reported up to $2 trillion of profits as “permanently reinvested” abroad, meaning it is not accountable for tax in the US. Some of the companies The Independent spoke to said that they still pay high taxes in the countries where the subsidiaries are registered. This practice can help them reduce their US tax bill because companies receive a dollar-for-dollar credit for any amount of tax they pay to other countries.

Oxfam, Christian Aid and Action Aid have said that in order to create a fairer tax system, companies must publicly report revenues and taxes, publicly declare any subsidiaries in tax havens and publicly reveal how much money they spend on lobbying politicians.