– The Curious Story Of The Chinese Tycoon Found “Chopped Up Into 100 Pieces” In A Vancouver Mansion:

Two days ago we introduced you to “the rich kids of Vancouver” for whom the most important decision in any given day is whether to spend half a million dollars on a new Lamborghini or on an investment such as “two expensive watches or some diamonds.” 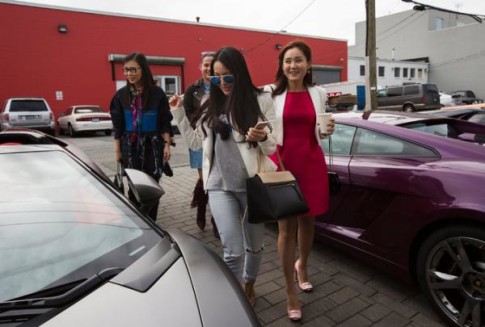 We now introduce you to someone who may be one of these rich kids’ dad. Or rather was, because Gang Yuan, a 42-year-old mining tycoon is no longer alive. His corpse was found chopped into 100 pieces in his Vancouver home. 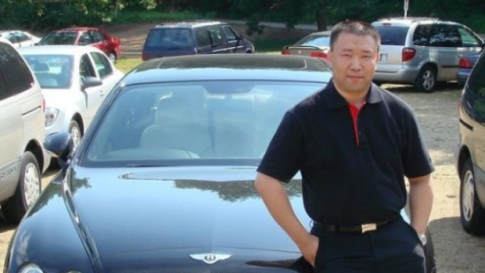 According to a civil lawsuit, Yuan came to Canada in 2007 with permanent resident status and made his money by investing in real estate and Saskatchewan farmland, in the process becoming the owner of a at least one abandoned multimillion-dollar Vancouver home… and much more. 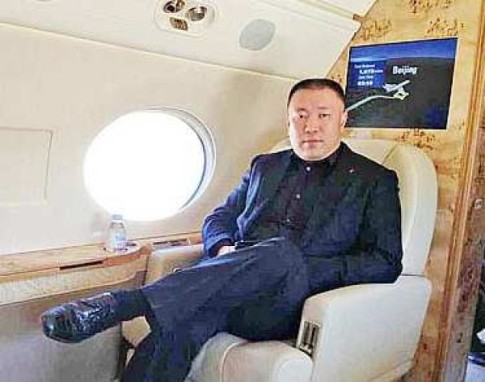 Gang Yuan seen his in his private jet

As The Province reports, Yuan has been linked to a government corruption scandal in southwestern China. He is also a shining example of how most of the billions in hot money flooding Vancouver real estate funds are sourced: illegally. This story helps to shed some light on the origina of at least a modest amount of that money.

The scandal led to a 19-year jail term for Yunnan province official Lin Yunye.  Yunye was jailed last November for selling $234 million in state mining assets to a number of businessmen from whom he accepted tens of millions in bribes – including gold bars, luxury watches and rhinoceros horns.

Yunnan, where Yunye was deputy director of land and resources, is a province of lush, bamboo-covered mountains. It is also known as China’s gem-trading hub because of its border with Myanmar, a failed state with bounties of ruby and jade stones that are illicitly smuggled into Yunnan.

Gem exchanges, $50,000 gold bars, a $500,000 bribe, and deals benefiting two Vancouver-area tycoons feature in the lengthy record of charges proven against Yunye in Yunnan Provincial Court. The verdict states Yunye abused his power from 2007 until his arrest in 2014. 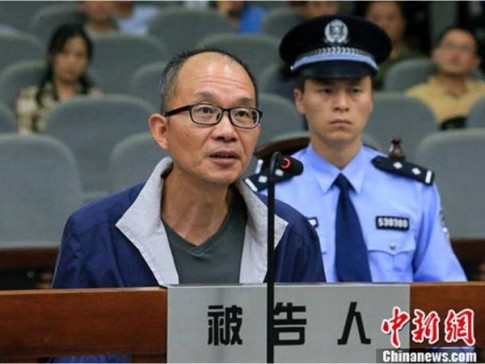 Lin Yunye is shown during sentencing in Yunnan Provincial Court

For 42-year-old Chinese mining millionaire Gang Yuan, the story ends May 2, 2015. His corpse was found chopped allegedly into 100 pieces in his British Properties home. According to a civil lawsuit, Yuan came to Canada in 2007 with permanent resident status and made his money — estimated at up to $50 million — by investing in real estate and Saskatchewan farmland.

In early 2010 Yunye met Yuan, then director of Beijing Datang Investment, in a restaurant in Yunnan’s capital city, Kunming. At stake was a contract for Yuan’s firm. Over dinner he asked Yunye to permit Beijing Datang expanded coal mining rights on a Yunnan mountainside.

As the men dined, Yuan handed Yunye a bag that contained a 1,000-gram gold bar, worth about $50,000. In exchange, Yunye gave Beijing Datang rights to mine in Yunnan until April 2014. And Yuan’s company later provided Yunye with additional gold bullion gifts, the verdict states, for more mining permits. Yuan was named as a witness in the verdict, but not charged.

Meanwhile, back in Vancouver in 2010, Yuan bought a $5-million British Properties home, adding to his numerous B.C. assets including a private island and a vacant $14-million Shaughnessy mansion. The West Vancouver home was purchased in the names of relatives Li Zhao and his wife, Gang Yuan’s cousin, court filings say. Zhao now is charged with Yuan’s slaying, and Yuan’s estate is the subject of a court battle between relatives in China and Vancouver, and his numerous mistresses and illegitimate children.

Zhao’s criminal case continues, and no allegations in the criminal or civil case concerning Yuan’s assets have been proven in court.

In another twist, Yuan’s West Vancouver home, private island and Bentley have been used as set pieces in the Vancouver reality TV show Ultra Rich Asian Girls. The daughter of alleged murderer Li Zhao is a star of the show, in which she claimed to own Yuan’s assets.

Huaican Ren, the other known Vancouver-area tycoon who testified against Yunye, is worth about $400 million, according to Forbes China. Ren reportedly made his fortune in gem trading before founding a number of Yunnan-based real estate and tourism companies, including North Star Enterprise Company Limited.

The Province first reported in early February that Ren and his wife Xuepei Sun possess two Vancouver homes worth about $10 million, including a home in the 4100-block West 8th Avenue bought for $4.6 million in July 2011. Neighbours said the Chinese owners have never been seen in the rotting Point Grey home, which was cited in a City of Vancouver “untidy premises” order in June 2015.

At this point we take a small detour to remind readers of what was our original theory about the origin of all these “mysteriously” empty Vancouver houses owned by Chinese expats. Indeed, it was specifically the house of Huaican Ren that we commented one two months ago.

Our attempt to explain these curious developments back in early February was the following:

What is happening is quite simple:

Or they are found dismembered, chopped up in hundreds of small pieces. Aside from that, everything is as laid out.

Anyway, back to the “curious story” of Yuan and Yunye.

The Yunnan verdict says that in 2013 Ren invited Yunye’s family to a dinner meeting. Yunye asked Ren if he could help Yunye’s wife with her personal business, and Ren immediately agreed, Yunye testified.

Yunye’s wife testified that after the dinner meeting, Ren invited her to North Star’s offices to discuss business. It was proposed that she sell several gems to him. Ren testified that he felt the gems were not worth much, but after negotiations he paid a large sum. He claimed he was afraid that Yunye would be offended if he paid too little, and the official would not permit North Star’s massive state-land tourism development, Ancient Dian Kingdom amusement park.

The final verdict states that Ren’s version of the gem deal could not be confirmed, but that documentary evidence showed that in September 2013 he made a 2.48 million RMB ($500,000 Cdn) cash payment to Yunye’s wife, in exchange for a construction permit. Subsequently, “the state-owned construction land use right transfer contract,” for North Star’s “Ancient Dian Kingdom Investment and Development Co.,” was confirmed for the June 2013 to January 2014 period. Ren was not charged for bribery.

Underlying the disturbing evidence in Yunye’s verdict is a big-picture story about how business is conducted in China as its economic system changes from communism to crony capitalism.

Reporting on Yunye’s November 2015 sentencing verdict, Chinese financial journal Caijing wrote: “The time period during which Lin (Yunye) was in charge of land resources coincides with the period featuring nationwide integration and acquisition of mineral resources. Aside from (Yunye), most corrupt officials in Yunnan have more or less intervened in the restructuring of mining companies, leading to the fire sale of many large state-owned mines and the loss of state-owned assets.”

Ren is from Wenshan, a state of Yunnan, and reports from China highlight his connections to Yunnan and Wenshan officials. For example, a Wenshan State website shows a picture of Ren and his wife “Mrs. Xuepei Sun” donating 10 million yuan ($2 million Cdn) for disaster relief to state Governor Huang Wenwu in 2010. In the ceremony a state party committee director declared Huaican Ren a friend of Wenshan’s government.

Chinese investment statements filed for Kunming North Star Enterprise Company Limited say that Ren is chairman, and a Chinese citizen with permanent resident status in Canada. According to the Global Real Estate Institute, Ren is among “the world’s leading real estate players.”

As for Ren’s Point Grey property, it was listed for sale about 10 days after The Province exposed its decrepit conditions.

It appears to have been sold for $6.5 million on March 3 according to MLS documents. But over a month later, a new owner has yet to be registered on title.

B.C. land title documents say that Ren and his wife bought the Point Grey home for $4.6 million in 2011 through a property transfer executed in a Beijing law office. The previous owner, Chinese investor Wei Min Zhang, flipped the home after buying it for $3.35 million in 2010.

“We can’t really tell anything from the MLS data,” Usher said. “Has any money changed hands? We don’t know.”

And while stories like these depicting how the shady Chinese criminal underworld moves to Canada and become the norm when it comes to Vancouver’s Chinese nouveau super riche, the underlying reality remains one where billions in laundered money end up in local real estate, leading to our favorite chart. This: 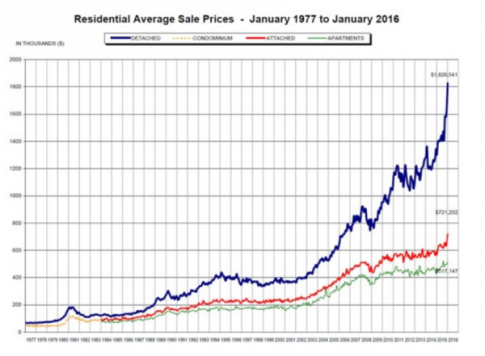