Nearly a decade since the housing bubble burst the dirty skeletons still emerge from the closet, and still nobody goes to jail.

In the latest example of how criminal Wall Street behavior leads to zero prison time and just more slaps on the wrist, overnight Warren Buffett’s favorite bank, Wells Fargo, admitted to “deceiving” the U.S. government into insuring thousands of risky mortgages. Its “punishment” – a $1.2 billion settlement of a U.S. Department of Justice lawsuit, the highest ever levied in a housing-related matter.

According to the settlement, Wells Fargo “admits, acknowledges, and accepts responsibility” for having from 2001 to 2008 falsely certified that many of its home loans qualified for Federal Housing Administration insurance.

According to Reuters, the San Francisco-based lender also admitted to having from 2002 to 2010 failed to file timely reports on several thousand loans that had material defects or were badly underwritten, a process that Lofrano was responsible for supervising.

According to the Justice Department, the shortfalls led to substantial losses for taxpayers when the FHA was forced to pay insurance claims as defective loans soured.

Wells Fargo is the latest bank in a long series of settlements which absolve banks of all their past bubble transgressions: numerous other lenders, including Bank of America Corp, Citigroup Inc, Deutsche Bank AG and JPMorgan Chase & Co, previously settled similar federal lawsuits.

Wells Fargo, however,  held out – perhaps due to concerns how such a settlement would impact its core mortgage origination business (recall it is the biggest mortgage lender in the US) – until yesterday. Its payment is the largest in FHA history over loan origination violations.

Taking credit for this record wristslap was U.S. Attorney Preet Bharara in Manhattan who said in a statement that Friday’s settlement is a reproach for “years of reckless underwriting” at Wells Fargo. “While Wells Fargo enjoyed huge profits from its FHA loan business, the government was left holding the bag when the bad loans went bust,” Bharara added.

That, and also the record bailout of course.

The accord also resolved a probe by federal prosecutors in California of alleged false loan certifications by American Mortgage Network LLC, which Wells Fargo bought in 2009.

No one has been criminally charged in the probes, and the Justice Department reserved the right to pursue criminal charges if it wishes, according to the settlement. It most likely won’t.

For Wells the settlement, which puts all of its unpleasant housing past behind it, was good news. Franklin Codel, president of Wells Fargo Home Lending, in a statement said the settlement “allows us to put the legal process behind us, and to focus our resources and energy on what we do best – serving the needs of the nation’s homeowners.”

Which may be a problem. As we showed recently, when it comes to the needs of the nation’s homeowners, they are declining. In fact, in the most recent quarter, Wells’ bread and butter, mortgage origination applications and pipeline are declining dramatically: 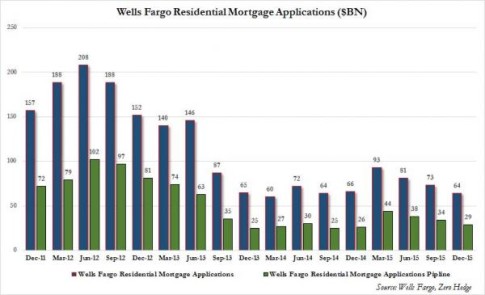 And, in fact, unless the government steps in to lower lending standards again and make it easier for banks like Wells to issue mortgages, the bank may find its revenue over the next few years declining dramatically. Of course, should the government relent and unleash speculative buying spree by insuring even low quality mortgages, the US will promptly find itself right back in the situation that Wells just had to settle a record a mount of money to forget.

Who knows, the next time all this happens, someone may even go to prison.