“It is well documented how the zionist influence is of a perverted nature, encouraging sexual behaviour of bizarre standards. Well, here is yet a new level of perversity, put out there by the zionist owned Daily Mail.” 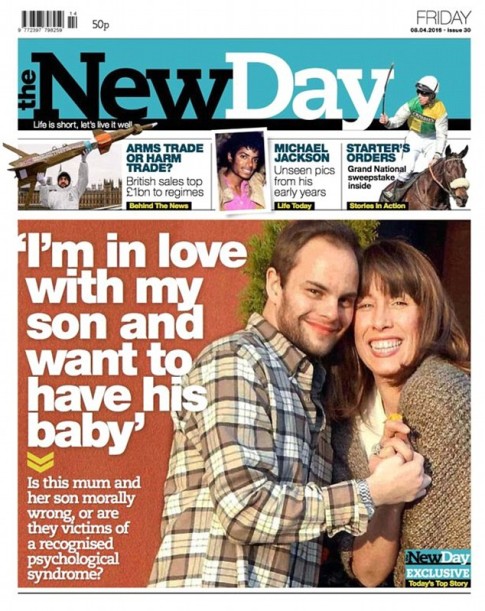 – Are They Trying to Normalize Incest Now? “Genetic Sexual Attraction” Cited for Why Mother and Son Are Getting Married:

Our modern politically correct society is trying to normalize (as in “make okay”) all sorts of behaviors that have never been normal and are simply not okay.

For more on that, consider this argument from a gay man on why he does not want to share a bathroom with a trangendered man (a man that used to be a woman) even though laws are being passed everywhere to force everyone to accept the phenomenon as “normal”:

I’m gay. I know a man when I see one. A woman who cuts off her breasts and grows a throat beard is not a man, she is a woman with a psychological disorder, known as gender disphoria. And I do not want to share a locker room or a shower with a woman. And YES, sorry libs, gender dysphoria is a mental disorder. That is the only reason insurance will cover the surgery–as treatment for a mental problem.

Well, now comes this icky story out of the Daily Mail about a 51-year-old mother who gave up her son for adoption, met him later fully knowing he was her biological son, and they “fell in love” after making out and having sex.

The 32-year-old left his wife for his mom, whom he now wants to marry, and they’re apparently so excited about this fact, they decided to publicize it to the world:

British-born Kim West, 51, and her son Ben Ford, 32, who lives in Michigan, have been in a relationship since they met in 2014 and says they have ‘incredible and mind-blowing’ sex.  The pair came back into contact two years ago after Mr Ford wanted to find out more about his birth parents and got in touch with Miss West.

They found themselves sexually attracted to each other and shared their first kiss over a bottle of champagne in a hotel before having sex. And just three days after they had sex for the first time, Mr Ford told his wife Victoria, he no longer loved her and would be leaving.

He told New Day that he told his wife: ‘Everytime I have had sex with you since I met her, I imagine its her I am kissing, otherwise I can’t perform.’

In normalizing one of the longest held taboos in civilized society, the article refers to this “phenomenon” as “genetic sexual attraction”. The couple insists it is somehow not incest for a biological mother and son couple to have sex with each other in their situation:

Genetic sexual attraction is a seldom-talked about phenomenon that occurs between adoptees and their long-lost parents. It describes feelings of intense intimacy between two relatives who have been separated during the critical years of development and bonding, and then meet for the first time as adults.

When an adult-child and their biological parent finally meet, the brain struggles to associate each other as family.  Instead, they become captivated with one another, sharing similar physical features, likes and dislikes, which is coupled with complex feelings of intimacy. This can lead both parties to express their emotions sexually.

So it’s not “incest” but “genetic sexual attraction”?

sexual intercourse between people who are very closely related

And the Cambridge Dictionary:

sexual ​activity between ​people who are too ​closely ​related to ​marry

The crime of having sexual intercourse with a parent, child, sibling, or grandchild.

Hmm. Sure sounds like incest to me. But calling it “genetic sexual attraction” gives it a certain official flair. Makes it sound formal. Legitimate. Definitely does not come with the built-in collective social disgust that the word “incest” does.

Apparently the British Medical Journal says that “genetic sexual attraction” occurs in half of all cases where people are separated and reunited with family members at a young age.

And that, ladies and gentlemen, is how they normalize incest.

Next they’ll make some fancy sounding name for bestiality, like “zoological sexual attraction” or whatever, and argue in medical journals why it’s a recognized mental disorder that we should just accept.

The powers that shouldn’t be love this because, well, besides the debauchery and destruction of innocence, it is also built-in population control.

And for further proof on the coordinated normalization, the Mirror, another major British publication followed up the Daily Mail’s piece on this couple on the same day by publishing an article about six other couples including a brother and sister, a father and daughter, and a grandma and her grandson and it, too, cites “classic cases” of “genetic sexual attraction,” not incest.

This world is so screwed up.

1 thought on “Are They Trying to Normalize Incest Now? “Genetic Sexual Attraction” Cited for Why Mother and Son Are Getting Married”