– The Beginning Of The End For Obamacare: Largest US Health Insurer Exits Georgia, Arkanasas:

Tracking the slow motion trainwreck of Obamacare has become one of our preferred hobbies: below is just a random sample of headlines covering just the most recent tribulations of the “we have to pass it to find out what’s in it” Unaffordable Care Act:

But the most surprising article we wrote was our explanation from last November explaining why “Your Health Insurance Premiums Are About To Go Through The Roof” showing that even insurance companies have been unable to earn a profit under Obamacare, as shown in the following chart: 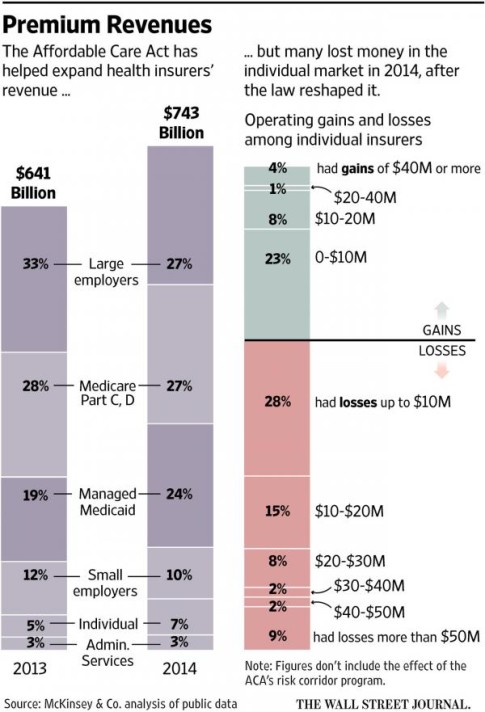 This was a stunning revelation because, after all, the Affordable Care Act was largely drafted by the insurance industry itself, and if for whatever reason, it itself was unable to capitalize on Obamacare, then it has truly been a disaster.

It all came to a head in late November of last year when none other than the U.S.’s biggest health insurer, UnitedHealth, cut its 2015 earnings forecast with a warning that it was considering pulling out of Obamacare, just one month after saying it would expand its presence in the program. At the time UnitedHealth Group said it would scale back marketing efforts for plans it’s selling this year under the Affordable Care Act, and may quit the business entirely in 2017 because it has proven to be more costly than expected.

In a statement, UnitedHealth said that “the company is evaluating the viability of the insurance exchange product segment and will determine during the first half of 2016 to what extent it can continue to serve the public exchange markets in 2017.”

Needless to say, the implications for Obamacare – which had seen a surge in problems over the past year – were dire: As Bloomberg reported at the time, “a pull-back would deal a significant blow to President Barack Obama’s signature domestic policy achievement. While UnitedHealth has been slower than some of its rivals to sell Obamacare policies since new government-run marketplaces for the plans opened in late 2013, the announcement may indicate that other insurers are struggling.”

“If one of the largest and presumably, by reputation and experience, the most sophisticated of the health plans out there can’t make money on the exchanges, then one has to question whether the exchange as an institution is a viable enterprise,” Sheryl Skolnick, an analyst at Mizuho Securities said at the time. UnitedHealth further said it suspended marketing its individual exchange plans and is cutting or eliminating commissions for brokers who sell the coverage.

Fast forward to today, this largest U.S. health insurer, announced it has decided to pull the plug on two state Obamacare markets.

Going forward, UnitedHealth said it will no longer sell plans for next year in Georgia and Arkansas, according to state insurance regulators. Tyler Mason, a UnitedHealth spokesman, confirmed the exits and declined to say whether the company would drop out of additional states, Bloomberg reported.

As per our extensive coverage of the topic, the reason for the pull out is simple: many, if not most, insurers have found it difficult to turn a profit in the new markets created by the Affordable Care Act, “where individuals turned out to be more costly to care for than the companies expected. UnitedHealth and Aetna Inc. both posted losses from the policies last year, as did big Blue Cross and Blue Shield plans in states like North Carolina.”

According to Bloomberg, UnitedHealth’s decision to stop offering ACA plans next year means that people who are currently enrolled with the insurer will have to choose a new health insurance provider next year. And while UnitedHealth is the biggest carrier in the United States, with about 42 million medical customers, it has a smaller role in the ACA’s markets. The company had about 650,000 in individual exchange-compliant policies as of Dec. 31.  Kenneth Ryan James, a spokesman for the Arkansas Insurance Department, told Bloomberg tgat UnitedHealth had a “small footprint” in the state, where Blue Cross and Blue Shield plans are dominant.

However, now that the the precedent has been made, it will likely promptly spillover to other major insurers, including Blue Cross Blue Shield plans, which are dominant on many state exchanges, and have also complained about losses in the individual market, citing higher-than-expected medical claims.

In total, Georgia currently has nine – make it eight after the withdrawal of UnitedHealth – health insurers that currently offer ACA polices, according to Glenn Allen, a spokesman for the state’s insurance commissioner. Others include Aetna, Humana Inc. and Cigna Corp. No other company has yet told Georgia that it’s exiting, and companies have until May 11 to decide, he said.

We are certain that many if not all will promptly follow in UnitedHealth’s footsteps as the beginning of the end for Obamacare finally plays out as so many skeptics of the “Affordable” Care Act had predicted.