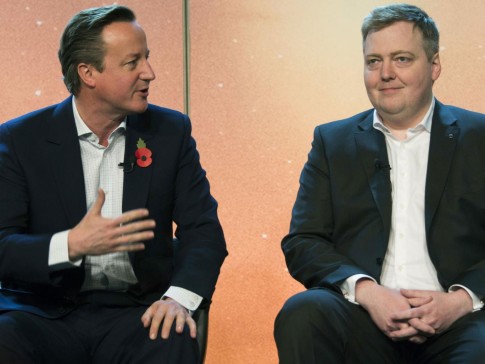 David Cameron with Icelandic Prime Minister Sigmundur David Gunnlaugsson, who was implicated in the documents

– Panama Papers: Britain ‘at the heart of super-rich tax-avoidance network’:

The UK was second only to Hong Kong in a list of international jurisdictions where the most banks, law firms and middlemen associated with the Panama Papers operate

David Cameron is facing calls for urgent action against tax havens in UK overseas territories and Crown Dependencies, as Britain was revealed to be at the heart of a shadowy global network of companies used by the super-rich to hide their wealth.

As tax authorities around the world were spurred to action by the release of 11.5m documents leaked from the secretive Panama law firm Mossack Fonseca, revealing how it helped clients dodge taxes and international sanctions, UK campaigners for tax justice reacted with dismay as it emerged that half of the companies exposed were incorporated in the British Virgin Islands.

The UK was also second only to Hong Kong in a list of international jurisdictions where the banks, law firms and other middlemen associated with the Panama Papers operate.

Mr Cameron, who has frequently called for greater transparency to expose offshore tax avoidance and will host an international anti-corruption summit in London next month, faced personal embarrassment as the leaks revealed details of how his late father Ian ran an offshore fund that avoided all tax in the UK.

In London, the Prime Minister’s spokesperson declined to comment on whether Mr Cameron’s family still had money invested in Blairmore Holdings Inc, the investment fund run by his late father Ian in the Bahamas, calling it “a private matter”.

Tax officials at the Her Majesty’s Revenue and Customs said they were waiting to obtain the documentation before making any decision on whether to pursue individuals or other entities named in the leaks from Mossack Fonseca, which has strongly denied any involvement in or knowledge of tax evasion.

Jennie Granger, an HMRC director-general, said that the International Consortium of Investigative Journalists (ICIJ) had been asked to share the data, which was disseminated among 107 media organisations in 78 countries, and has pledged to examine it “swiftly and appropriately”.

But in further evidence of the UK’s centrality to the global networks uncovered in the papers, three British and Channel Island banks – HSBC, Coutts and Rothschild – were named among the 10 banks that most frequently request offshore companies for their clients.

Toby Quantrill, an expert in international tax avoidance at the Christian Aid charity said the leaks exposed to the extent to which UK-based middlemen and UK-administered tax havens are “at the very heart of this rotten system”.

Oxfam said the UK was in “a unique position” among the countries of the world to “clean up the murky world of tax havens”.

Mr Cameron has faced criticism for failing to secure reforms in all but two of the UK’s overseas territories and Crown Dependencies, which see would see major beneficiaries of offshore companies named in public registers.

The Prime Minister wrote to leaders of countries that operate as tax havens as far back as 2014 urging action. He is now facing pressure to take a harder line, and legislate for greater tax transparency in UK territories and dependencies.

Mr Quantrill said Mr Cameron had one month to take action ahead of May’s anti-corruption conference in London.

“The Prime Minister has the power to clean up a major chunk of the global financial system and in the light of the Panama papers, he should use it,” he said. “The UK must take immediate steps to reveal the real owners of business in the territories that we control so the public can know the truth.”

Meg Hillier, Labour MP and chair of the influential Public Accounts Committee said that while she would welcome action on UK-administered tax havens, international action was needed.

“People wring their hands and say it’s all too difficult to deal with, but we have an opportunity with the Prime Minister’s conference in May, for the UK government to take a lead on tackling all tax havens,” she told The Independent. “If you just do it for UK territories alone, people will just move to Panama or elsewhere. It won’t stop people who want to wilfully hide their money.

Labour MP John Mann, a member of the House of Commons Treasury Committee said that the British Virgin Islands and other jurisdictions should be “thrown out of [the] UK” if they refused to end what he called “tax evasion systems.”

The Organisation for Economic Cooperation (OECD) condemned Panama’s “failure to meet international tax transparency standards” and said the London anti-corruption could be a “critical” moment in the fight against tax avoidance.

The Prime Minister’s spokesperson said yesterday that the Government was working with UK overseas territories and Crown Dependencies on “implementation” of public registers of companies’ beneficiaries.

“The government has taken a range of action to tackle tax evasion, avoidance and aggressive tax planning…Through the HMRC we have already been carrying out an intensive investigation of off-shore companies including in Panama. Clearly this data may be able to assist with that. That’s why HMRC asked the ICIJ for the information and they will act on it swiftly.

“We have been taking action to crack down on offshore evasion. It was the PM that put this front and centre of our G8 presidency and led global efforts to improve action on tax and transparency,” they said.