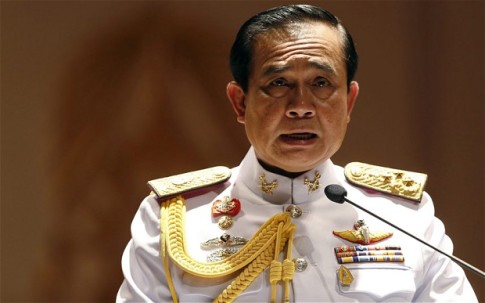 Thailand’s junta has officially lifted martial law, 10 months after seizing power in a coup, but replaced it with a new executive order retaining sweeping powers for military

Thailand’s junta lifted martial law in most of the nation, but 10 months after staging a coup, it remains firmly in control – with new laws invoked Wednesday that essentially give it absolute power.

Although it was not generally visible in everyday life – there were few soldiers in the streets – it scared off foreign investors and hurt tourism, which accounts for nearly 10 percent of the GDP. Tour operators called it a tourist deterrent, partly because many insurance companies won’t cover travelers to countries under martial law.

Thailand’s king on Wednesday formally approved a request from the junta that martial law be lifted.

In its place, though, the junta invoked a special security measure called Article 44 in the military-imposed interim constitution that gives Prayuth the power to override any branch of government in the name of national security, and absolves him of any legal responsibility for his actions.

Thai media have referred to it as “the dictator law.” Under similar legislation in the 1960s, a Thai dictator carried out summary executions.

“From the outside, the lifting of martial law is good news for business and tourism,” said Thitinan Pongsudhirak, a political scientist and director of the Institute of Security and International Studies at Bangkok’s Chulalongkorn University.

“But from the inside, we’re functionally in the same boat,” he said about Article 44. “Similar restrictions are still in place. And where there are pockets of dissent and political expression it is likely to be more draconian.”

The main difference between the two measures is that martial law – which remains in place in several southern provinces where the army is fighting a decade-old Islamic insurgency – is very specific and Article 44 is very vague.

Martial law places the military in charge of public security and allows arrests without warrants, trials of suspects in military courts, bans on public gatherings, and censorship in the name of preserving order.

The junta issued one order with 14 articles late Wednesday under Article 44 that are similar, giving the military the authority to make arrests, conduct searches and seize assets, censor the media and crack down on any threats to national security or the monarchy. Some reiterated previous junta orders imposed after last year’s coup, like bans on political rallies of more than five people and threats to jail those who violate junta orders. Other orders under the article could be issued later.

“Thailand’s friends abroad should not be fooled by this obvious sleight of hand by the junta leader to replace martial law with a constitutional provision that effectively provides unlimited and unaccountable powers,” said Brad Adams, the group’s Asia director.

Thailand’s military has a history of intervening in politics, having seized power 12 times since the end of absolute monarchy in 1932.

Prayuth imposed martial law on May 20, 2014, when he was the country’s army chief. On May 22, he led a coup that toppled the elected civilian government after months of sometimes-violent street protests.

Stability was restored but at a steep price. Thailand’s democratic institutions were dismantled, and the country’s authoritarian rulers have crushed dissent.

Critics say the coup leaders’ real goal is to eliminate the political influence of former Prime Minister Thaksin Shinawatra, who was overthrown in a 2006 coup. His sister, Yingluck Shinawatra, was ousted by a court ruling just days before last year’s coup and later barred from holding office for five years.

The coup was part of a societal schism that in broad terms pits the majority rural poor, who back the Shinawatras, against an urban-based elite that is supported by the army and staunch royalists, who see the Shinawatras as a threat to the traditional structures of power.

Since the coup, the junta has moved to consolidate power. In July, the military adopted the interim 48-article constitution and formed a junta-appointed legislature. In August, the legislature appointed Prayuth as prime minister – a post he said he will retain until elections, though no date has been set. Polls were initially promised for this year, then pushed to sometime in 2016.

Prayuth sought to downplay concerns about Article 44, saying nobody had made much fuss about it until now.

“Article 44 will be exercised constructively,” Prayuth said. “Don’t worry, if you’re not doing anything wrong, there’s no need to be afraid.” 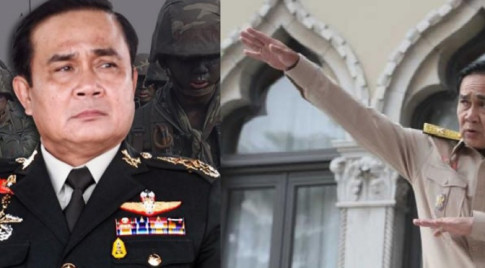 Not content with writing his own temporary military constitution just after the May 2014 coup d’état and appointing his cronies and lackeys to the so-called “parliament”, Generalissimo Prayut has also been using the “because I say so” law. Known officially as “Article 44” this law confirms that every whim of the egotistical general is enshrined into law immediately without any argument or debate. One wonders why he even bothers with his appointed parliament.

As 2015 draws to a close it is worth reviewing how this law has been used.

In April Prayut used his powers to decree that after the cancellation of martial law, the military had full powers to keep the peace and security of the land by repressing anyone opposed to the junta. Basically this was martial law used against political activists, while allowing shops and businesses to function normally.

“Prachatai” web newspaper has detailed every time when Article 44 has been used. The first act was to cancel elections to local administrative bodies.

It has also been used to force through “special economic zones” by changing land use at a stroke. Lottery income can be used for any project deemed “beneficial” by the junta. Taksin was also stripped of his police rank under this law.

In a pretend show of firmness, Article 44 was used to control illegal fishing, but it is doubtful whether any real changes will take place. This was just an attempt to avoid sanctions against Thai seafood exports.

Unruly motorbike youths have been “banned” from racing in the streets and their parents have been “ordered” to discipline their children. Any parent failing to do this can face a prison sentence or a fine.

The suppression of drugs has also been placed in the hands of the military, no doubt allowing the soldiers to make profits from doing business directly with the drug lords without competition from the police!

The general has also decreed that the “command centre for resolving civil aviation issues” is placed directly under the control of the junta. This was after international safety bodies had raised serious concerns about Thai aviation safety. The message from this and from the control of fishing is that “only the Generalissimo” can solve Thailand’s problems.

However, the vast majority of Article 44 decrees concern the moving, appointing, sacking and extension of tenure for government officials in a wide variety of departments. All this is designed to place trusted cronies in positions of power and to get rid of opponents …. just because Prayut says so. There was a time when Taksin was accused of appointing cronies and allies to top positions and this was deemed to be corruption by the yellow shirt royalists. But then Taksin was elected by a democratic vote, while Prayut just took power in a military coup, which makes it all alright!

More recently the deluded and vicious general has been ranting against pro-democracy academics who are facing prosecution for contravening his decrees. “If it’s prohibited to speak now, then they should keep quiet! It’s the same group of delinquent academics isn’t it?! I don’t care! If they want to be active then they and anyone who follows them will have to face the consequences! What if people start shooting at them and throwing bombs? They’ll just have to die then, won’t they?” The murdering general who shot down unarmed demonstrators in 2010 and staged an illegal coup in 2014, added: “Do they teach? They should be teaching kids to be good people and to respect the law”!

This is the man who is in charge of Thailand right now. He needs to be overthrown and put behind bars.