– ISIS In California? 17 “Arabs In Turbans” Fired Guns And Chanted Allahu Akbar In Middle Of The Desert:

On December 2, Syed Farook and his wife Tashfeen Malik stormed a county holiday party and murdered 14 people with assault rifles in an attack that authorities would later say was inspired by Islamic State and its reclusive leader Bakr al-Baghdadi.

Investigators surmised that Malik was likely radicalized when she moved from Pakistan to Saudi Arabia (imagine that) and probably played a role in convincing her husband to take up the jihadi cause.

Both Farook and Malik were killed in a shootout with police, but we now know that the ISIS “presence” in San Bernardino didn’t die with the star-crossed lovers. Police responded on Sunday to multiple reports from campers that more than a dozen men of “Middle Eastern descent” were up all night on Saturday yelling and firing weapons into air.

“San Bernardino County sheriff’s deputies and an FBI agent responded to the area known as Deep Creek Hot Springs after reports of gunshots and chanting in the predawn hours,” The LA Times reports. “According to law enforcement sources, 17 men of Middle Eastern descent were detained.” Here’s a picture taken at the scene: 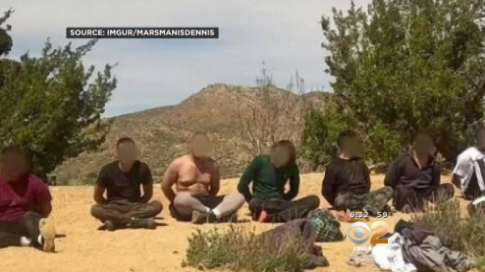 One of the 911 callers claimed that more than “100 shots” had been fired and that there were men “wearing turbans” in and around the area. With the assistance of a police helicopter, the “jihadist” contingent was located “walking away from a creek carrying backpacks and other items.”

Those “other items” included “several” handguns, a rifle and a shotgun.

Upon further investigation, it was determined that in fact, the men hadn’t done anything wrong at all. “A records check of the subjects, their weapons, and their vehicles was completed,” a statement from the sheriff’s department reads. “The records check revealed none of the subjects had a criminal history or outstanding warrants, the weapons were registered with the Department of Justice except for the rifle, and the vehicles were also registered.”

Right. So apparently, their “crime” was being Arab on a Saturday night.

Still, this one is a bit of a head-scratcher. While it does seem likely that campers saw what they wanted to see here, it’s not everyday that 17 Arab men congregate in Apple Valley and fire guns all night. “If there’s something going on wouldn’t you want your local police or law enforcement to take care of it so that citizens like you or myself don’t have to take it into their own hands?,” one local resident asked.

“None of the persons interviewed yesterday were identified as terrorists,” the sheriff’s department said on Monday, in an effort to assuage the public.

A recording of police scanner chatter that was posted online following the incident did nothing to calm locals’ frayed nerves. “All of the subjects are armed with handguns, that [witnesses] actually see,” an officer says. “Um, they were there all night and uh, they were up all night chanting Allahu akbar-type stuff,” he continues.

We’re not sure what “Allahu akbar-type stuff” means exactly, but between the audio from the police scanner and the 911 calls, the picture one gets is of more than a dozen Arabs donning turbans running around the desert chanting nasheeds while firing off pistols into the night sky. So, something like this we suppose:

One might fairly ask why these 17 men can’t go on a camping trip without being fingered as terrorists but the dozen or so heavily armed “states’ rights activists” that occupied the Malheur National Wildlife Refuge earlier this year were allowed to close down a federal building for weeks on end with no intervention whatsoever.

“There was no evidence found that a crime had been committed by any of the subjects,” the county would later admit.

Hopefully, none of the men pictured above turn up at LAX with TATP-laden baggage next month.

Below, find a news report from a local CBS affiliate.