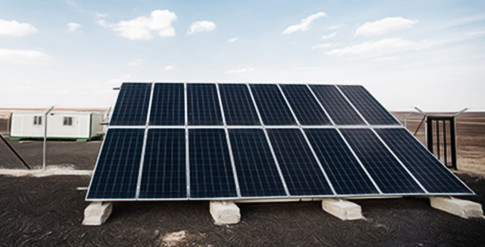 – Thanks to Solar Panels, Syrian Farmers Could Feed People for First Time in Years:

United Kingdom — A group of Syrian activists have launched a solar-powered irrigation initiative in the Idlib province to assist local farmers in restoring local agriculture devastated by the country’s five year civil war. Prior to the revolution,  farmers in Idlib’s western countryside would use electricity to pump wells and irrigate their orchards. Since the crippling devastation of much of the country’s infrastructure, some have gone years without being able to harvest a single crop. They have been forced to seek out alternative energy solutions.

In the village of Badama, farmers are beginning to irrigate and harvest their lands again after their main source of power, the Zayzun power plant, was bombed by government forces. Constant power cuts and crippling fuel prices due to the ongoing war have seen agriculture become untenable. Thanks to a new project launched by local activists, in collaboration with the local council and with support from a U.S. civil society organisation, $75,000 has been invested in solar panels, batteries, water pipes and other items. With 12 separate units, each one consisting of 14 panels, 200 farmers are already benefiting from the initiative.

Positioned at slanted angles to harness and absorb the sun’s power during the day, the panels charge batteries, which are connected to them. The project is providing enough energy to extract water from the wells and provide irrigation to approximately 300 acres of Badama’s agricultural land. In turn, the sustainable power source is enabling the farmers to once again cultivate their vegetables, apple orchards, and olive groves.

An official publishing platform for aspiring Syrian journalists, Damascus Bureau, reported an improvement in the quality and quantity of Badama’s agricultural production. It said farmers are no longer struggling to make ends meet and called the project a huge success.

“God has blessed us with sunshine throughout most of the year, and thanks to its rays, irrigated lands will never be unkind to those who cultivate them,” local council member Abu Mohammed told the Bureau, saying he hoped the initiative would be rolled out to all liberated areas.