As part of Trump’s blistering, unconventional and very unexpected rise to the top of the Republican presidential nominee ranks, he has seen his share of threats – some serious, most in jest – to both his person, and in some cases his life. Apocryphally, some commentators have predicted that a Trump presidency would be such a shock to the status quo that if successful in winning the presidency, he would never make to inauguration day alive.

Today, such concerns were once again inflamed when a mysterious tombstone on behalf of Donald J. Trump (the date of death is blank: 1946 – …) was erected in Central Park.

As Gothamist first reported, “someone erected a very classy Trump tombstone in the middle of Central Park this weekend, and were kind enough to leave his expiration date open to the fates.” 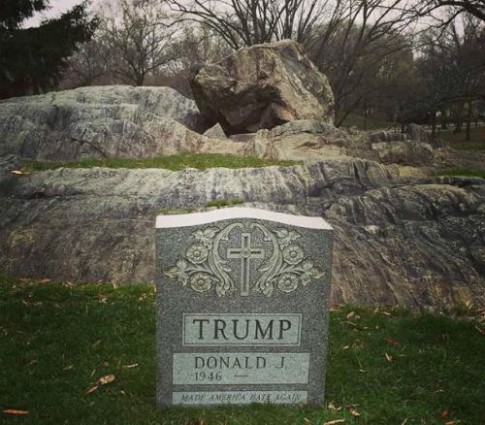 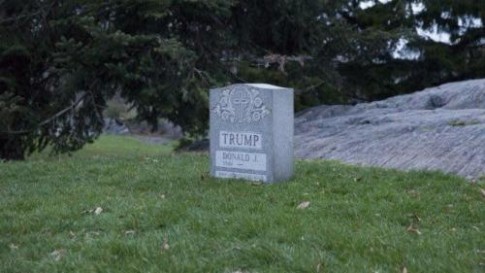 Gothamist adds that “tipster Annie Reiss came upon the beautiful tribute to the presumptive GOP presidential candidate this morning near Sheep’s Meadow. “There were people taking pictures which is why I stopped,” she told us. “It was definitely provocative, strange for Easter morning.”

The tombstone has the inscription, “Made America Hate Again.”

As Mashable adds, plenty of people shared photos of the tombstone on social media, but no one seems to know what it means, other than “being a prank of questionable taste.”

By evening, the tombstone had been removed by park officials.

According to Trump’s latest Tweets, he is either unaware, or doesn’t seem too worried about this implicit threat or poorly made joke; instead he is focusing his energy on the previously noted lawsuit which the real estate billionaire threatens to file against Ted Cruz for “stealing” delegates…

Just to show you how unfair Republican primary politics can be, I won the State of Louisiana and get less delegates than Cruz-Lawsuit coming

… as well as the ongoing “wife-gate” involving Heidi Cruz and Melania Trump:

See Lyin’ Ted, even the @DailyBeast (no fan of mine) says this story came from Rubio, not Trump! pic.twitter.com/Okc8XajVnz

Once again, we can only imagine the shocked media reaction if a tombstone mysteriously emerged in one of the world’s busiest venues for any of the other presidential candidates.