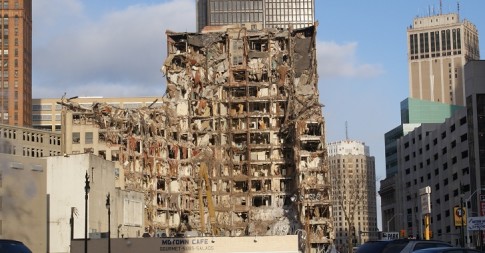 – Why America May Not Be Considered A “First World Country” Much Longer:

(UR) Before George Manuel published The Fourth World: An Indian Reality, the idea that any real differences existed among population groups in fully developed countries was still taboo. At the time, Indigenous rights were still something of a political non-issue, a blemish on a relatively clean looking statistical sheet that First World countries paid lip service to all too infrequently. Since then, an increasing amount of scholarship seeks to understand the differences between Fourth World populations living inside First World countries.

The Fourth World, basically, are populations living within a state who have little or no representation by that state. These populations, from the standpoint of the First World, are generally impoverished and would not fit the criteria for a “First World” country. They are, essentially and literally, the oppressed. It is what we see as the Third World when we are looking at Africa and South America, hidden within the First World just outside our doors. Unfortunately, the Fourth World is growing.

As Anthony J. Hall points out in his book The American Empire and the Fourth World, Indigenous populations are not the only peoples who are finding themselves marginalized within the North American Fourth World (p. 283). The ongoing Flint Water Crisis is just the most recent example of the state-sponsored expansion of the Fourth World, particularly as it looks so similar to something that might happen in the Third World.

For African-Americans and Hispanic Americans, the Fourth World is an old reality with a new name. Since the economic collapse of 2008, Black and Hispanic populations have been increasingly marginalized, and the way the government once spoke about Indigenous populations must now be applied to other racial and ethnic groups. Where Indigenous peoples are confined to racially segregated Reservations, Black Americans are finding themselves increasingly limited to urban ghettos where First World opportunities are equally non-existent. Moreover, as Flint and the #BlackLivesMatter movement indicate, African-Americans and Hispanics are less and less represented by the state, clearly placing them within the boundaries of the Fourth World — boundaries that are quickly moving beyond the typical racial norm.

The Occupy Movement represented a clear indication that the working poor, or precariat, is no longer feeling represented by the First World state. With this massive inclusion of a working-class, poor, ethnically diverse group, to the already and obviously marginalized, the population of Fourth World America at the very least rivals the population of First World America. And while the American government continues to nominally supply aid to the Third World, the Fourth World inside the U.S. is slowly being forgotten.

While the First World criticises various governments in traditionally Third World continents as being unfair and corrupt — calling them out for their ongoing human rights abuses — the abuses being perpetrated on the Fourth World are constantly ignored, no matter how similar the two start to appear. Meanwhile, as the Governor of Michigan, Rick Snyder, defines the Flint issue as “a failure of government at all levels,” those governments still claim to represent the citizens of Flint and their best interests.

If this is the representation a growing majority of people are subject to in America, then the way the First and Fourth World are understood needs to be reevaluated. More importantly, where the United States fits within the list must be reconsidered. Only when we begin to see our own situation from a new perspective can we learn how to fix it, or find a solution.