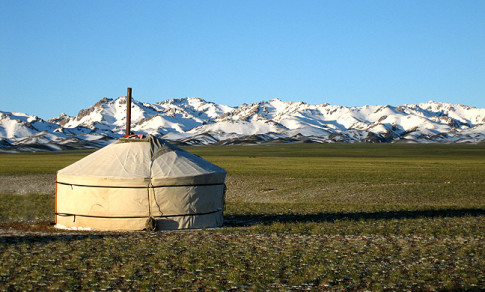 Hundreds of thousands of farm animals have perished in a slow-moving natural disaster in Mongolia and the international aid response has been insufficient, the Red Cross said Friday.

Mongolia has been hit by a devastating natural phenomenon known as a “dzud”, said the International Federation of Red Cross and Red Crescent Societies (IFRC) — a hot summer drought followed by a severe winter.

The combination spells doom for livestock in a country where IFRC said a third of the thinly-spread population rely on animal husbandry for their livelihoods.

Goats, sheep and cows die en masse, unable to graze sufficiently in the warmer months to build up the reserves necessary to withstand later temperatures that regularly drop to -50 degrees Celsius.

More than 350,000 animals have already died, but more than a million deaths are expected, according to the latest available data from the UN mission in the country, IFRC said.

Its East Asia communications delegate Hler Gudjonsson told AFP: “We’re only about one-third through the disaster.”

Video footage released by the organisation showed a herder dragging the brown, furry carcass of a goat by the horn through the dirt, tossing it onto a pile of dead sheep, amid loose skulls, ribs and femurs scattered across the steppe.

Bayankhand Myagmar, 50, whose daughter is disabled and husband ill, said she had lost 400 of her 700 animals. She had borrowed to buy extra fodder, hoping to later repay her debts in cashmere, but had not been able to save them, despite bringing the weakest into the family tent, or ger.

“If they get weak and die in front of my eyes, it’s very, very hard,” she told IFRC, crying. “I feel so sorry for them. I tried to save them but I couldn’t.

She feared for her family’s future. “My husband and I are over 50, so nobody will employ us,” she said. “We will not find any other jobs, but we are not yet entitled to pensions.”

IFRC has launched an emergency appeal for more than $800,000 to assist around 25,000 vulnerable herders, but after more than two weeks has received less than half the goal, Gudjonsson said.

“We already knew this was going to happen in November, but we knew that there was no way we could raise funds for something that hasn’t happened yet,” he added.

“It’s not a tsunami, it’s not an earthquake and it’s not a sudden disaster. It’s a long-term condition and situation, so we don’t have a breaking point where we can say, today this happened, and people suddenly need a lot of assistance.

“We’re expecting to see a large number of families who will have lost everything, who will have gone from affluence to utter poverty.”

The loss of their pastoral livelihoods leaves nomads with no other source of income or employment, he said, with most forced to move to tent districts on the outskirts of Mongolia’s urban centres, living without basic infrastructure and little or no income.

Former herder Khurelbaatar Tovuu, who lost his animals in the last dzud in 2010, told the IFRC: “My family used to sell wool and cashmere. I had something to do.

“Now I have nothing to do and my reputation has gone down. People treat me badly because I’m a poor man.”