The Daily Mail reports, the president of Emory University has spoken to demonstrators who said they were frightened after someone wrote ‘Trump 2016’ in chalk around campus.

Students at the Atlanta school, which has an enrollment of more than 14,000 claim their ‘safe space’ was violated when the messages appeared on sidewalks and buildings.

Jim Wagner, president of the Atlanta university, wrote Tuesday that the students viewed the messages as intimidation, and they voiced ‘genuine concern and pain’ as a result.

He acted after student government wrote to him and slammed the university’s response, prompting a meeting that led to protests.

Now administrators want to track down those responsible for the controversial markings.

Be warned the following “controversial markings” may offend… 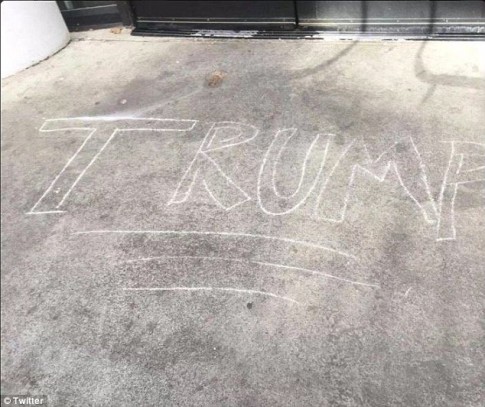 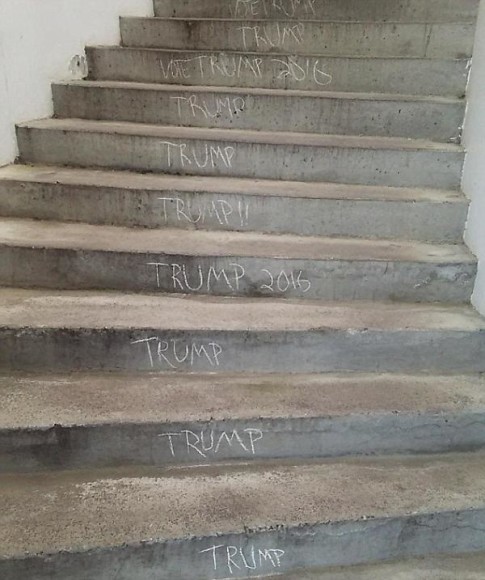 Had enough… there is more!! 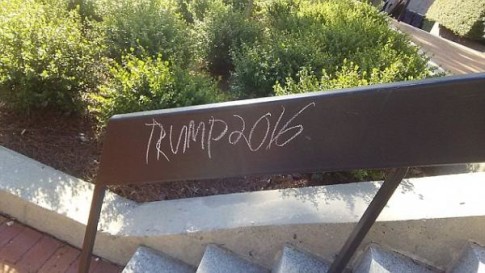 Emory’s student newspaper, The Wheel, said Wagner outlined four steps that administrators plan to take in order to address the issues raised by the protesters who said they were in pain in a campus-wide email.

Wagner added that the Freedom of Expression Committee is meeting to address whether the person or people responsible for the chalking were in compliance with Emory’s policy.

He said that they would debate technical issues, such as whether or not the chalkings were done on an appropriate surface.

However, he believes that the broader concern motivating the protests had to do more with the ideas the chalkings stood for than how they were done.

The Wheel also reported that the students this week chanted, ‘You are not listening! Come speak to us, we are in pain!’ shortly before Wagner agreed to meet with them.

‘The crybaby students forfeited any expectation of an open discussion with their demands that any talk or chalk of Trump should be banished from their fantasyland.’

‘I have no idea how you kids will survive once you get out into the real world. People have different opinions than you. You need to grow up, and fast.’

One person also wrote: ‘Within a year I am ashamed of both my undergraduate college (Yale) and my graduate university (Emory Law, ’77).

‘I am a liberal supporter of Clinton and Sanders (the former by a shade) and I want to shout at the thin-skinned crybabies on these campuses who are so obsessed with ‘safe spaces’ and so dismissive of free speech values: “GROW THE F*** UP !”

As we summed up recently, no matter where you go in life, someone will be there to offend you. Maybe it’s a joke you overheard on vacation, a spat at the office, or a difference of opinion with someone in line at the grocery store. Inevitably, someone will offend you and your values. If you cannot handle that without losing control of your emotions and reverting back to your “safe space” away from the harmful words of others, then you’re best to just stay put at home. 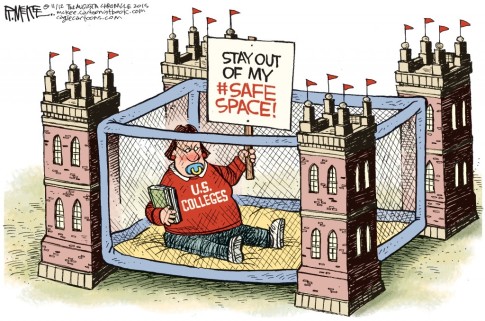 Remember, though: if people in the outside world scare you, people on the internet will downright terrify you. It’s probably best to just accept these harsh realities of life and go out into the world prepared to confront them wherever they may be waiting.

1 thought on “Emory Students “Scared, In Pain” After Safe-Space Violated By Word “Trump” Written In Chalk”