The government projected a C$29.4 billion ($22.5 billion) deficit for fiscal 2016-17 and gave no target date for returning to a balanced budget. This budget broke virtually all pledges the Liberals made before the election, including running just three years of deficits of up to C$10 billion before balancing the books by fiscal 2019-20.

“We are seizing the opportunity to invest in people and the economy, and to prepare Canada for a brighter future,” Finance Minister Bill Morneau said.

What he is really seizing is the Bank of Canada money printer, because in order to monetize this surging deficit, the BOC will soon have to unleash its own QE in the coming months.

As Reuters adds, because the Liberals command a majority in the Canadian Parliament’s House of Commons, the budget is guaranteed to pass.

Which is bad news not so much for the Canadian Dollar, which will certainly devalue in the coming months as the market prices in what a massive surge in deficit spending means although so will all other currencies as the global debasement race accelerates once more in a few short months, but for bank depositors, because deep inside the budget announcement, in the section discussing “tax fairness and a strong financial sector”, we have official confirmation that Canada has just become the latest country to treat depositors as the bank creditors they are, and as such, they too will be impaired, or “bailed-in” the next time a Canadian bank needs to be rescued.

To protect Canadian taxpayers in the unlikely event of a large bank failure, the Government is proposing to implement a bail-in regime that would reinforce that bank shareholders and creditors are responsible for the bank’s risks—not taxpayers. This would allow authorities to convert eligible long-term debt of a failing systemically important bank into common shares to recapitalize the bank and allow it to remain open and operating. Such a measure is in line with international efforts to address the potential risks to the financial system and broader economy of institutions perceived as “too-big-to-fail”.

The Government is proposing to introduce framework legislation for the regime along with accompanying enhancements to Canada’s bank resolution toolkit. Regulations and guidelines setting out further features of the regime will follow. This will provide stakeholders with an additional opportunity to comment on elements of the proposed regime.

Canada’s financial system performed well during the 2008 global financial crisis. Since that time, Canada has been an active participant in the G20’s financial sector reform agenda aimed at addressing the factors that contributed to the crisis. This includes international efforts to address the potential risks to the financial system and broader economy of institutions perceived as “too-big-to-fail”. Implementation of a bail-in regime for Canada’s domestic systemically important banks would strengthen our bank resolution toolkit so that it remains consistent with best practices of peer jurisdictions and international standards endorsed by the G20.

This new “bail-in” regime is spun as benefitting taxpayers; what isn’t mentioned is that most of those taxpayers who will be “protected” also happen to be the impaired depositors (also known as creditors) in these soon to be bailed-in banks, which begs the question: just who or what is being protected here?

Should oil remain at its current price, or drift lower again, we will certainly find out in practice, because as even Canada’s regulator is now warning, there is far less stability than meets the eye behind the “rock solid” balance sheet facade of Canada’s banks. 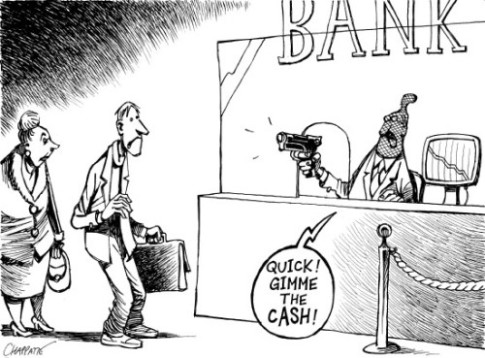