– Greece Orders Banks To Record “Personal Data” On Anyone Who Was Hoarding Cash:

Over the course of documenting the ECB’s push to phase out the €500 note, we stumbled upon something rather interesting that’s taking place at Greek banks.

Courtesy of a reader, we learned that Piraeus Bank (among others) has begun charging a fee to exchange large denomination bills for small. The charge is listed as 0.15% by the bank and Kathimerini would later report that across the Greek banking sector “exchanging one 500-euro note for smaller bills, [will cost you] 3-5 euros (depending on the bank), while the maximum charge comes to 200-250 euros regardless of the amount a customer wishes to exchange.”

This is amusing for two reasons: 1) the ECB effectively gets to charge for the privilege for banning large bills and 2) it means that if you are Greek and you were effectively forced to take your money out of the bank because after last summer you feared a depositor bail-in might be right around the corner, you now have the distinct pleasure of having to pay a fee to exchange your large bills for smaller ones at the very same banks where you withdrew the money in the first place.

The entire effort to eliminate the €500 note is set against the backdrop of a larger push to phase out physical cash. Without physical cash, there is no effective lower bound as citizens cannot resort to banknotes and coins when interest rates fall. Rates then, can go as low as the central bank needs them to in order to facilitate consumer spending and thus centrally plan the economy.

Of course central banks aren’t going to come out and say that. The official reason given for eliminating large bills (and sooner or later small bills too) is that it reduces crime. If there’s no cash there will always be an electronic record of transactions which presumably would deter criminal activity unless criminals resort to payment in-kind or otherwise devise an underworld barter system.

Implicit in all of this is the notion that if you are in possession of large bills you are probably a criminal. Sometimes, that’s true. Take the two men who were arrested this month at the Madrid airport with €200,000 in €500 notes rolled up in cigarette packs, for example: 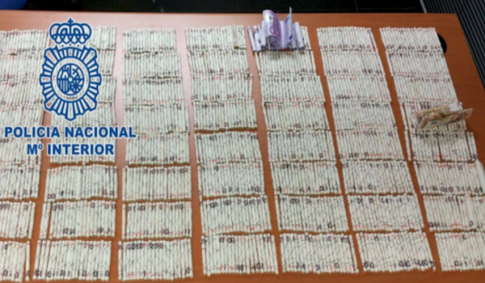 But other times, you might be in possession of large bills for other reasons. Like say the central bank has cut rates to zero and you’re afraid that soon enough, the bank won’t be able to sustain its margins so it will pass along NIRP to you. Or say the troika threatened a depositor bail-in and you’re afraid they’ll do it again, so you took all of your money out of the bank and put it in the mattress.

Unfortunately, even if you do have a good reason (not to mention a right) to be in possession of large amounts of cash in high denomination notes you’re going to be treated like a criminal, and it starts in Greece. As Kathimerini reports, Greeks who attempt to exchange €500 notes for smaller bills will now have their transaction and personal data recorded by the bank. Here’s more:

Commercial banks are being ordered to note the personal data and transaction history of clients who exchange 500-euro notes, along with cross-checking the details recorded with other transactions by those customers, according to a circular issued by the Bank of Greece.

The aim of the measure – on top of a commission charged by banks on the exchange of 500-euro banknotes with smaller ones – is to prevent money laundering, which experts believe to be behind demands by certain bank clients to exchange bills of high denomination.

Kathimerini goes on to note that “Greece ranks among the European Union countries with the highest circulation of paper money, amounting to 25 percent of the gross domestic product, while the average in the EU is below 10 percent.”

And we’re sure that’s part of the excuse for the “record keeping.” There’s 2.5X the amount of physical currency in circulation in Greece as the rest of the EU, therefore there must be more criminals.

It’s as though The Bank of Greece (or, more appropriately, Brussels) just can’t seem to figure out why there would be more cash in circulation in Greece as a percentage of GDP than in other countries. Allow us to help solve that mystery for you Brussels: it’s because you tried to rob Greek depositors last year.