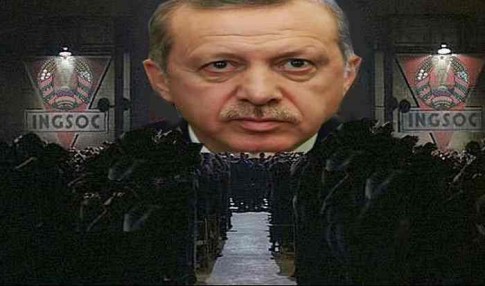 Istanbul, Turkey (TFC) – Recent days have seen the death of Turkish journalism at the hands of the country’s leadership. Government forces, after essentially hijacking a leading outlet with riot police, bent it into a pro-government mouthpiece. This marks but the latest in a long line of attacks on press freedom and adversarial coverage by Turk officials.

Journalists at the Daily Zaman woke up to Orwell after Turkish riot police stormed their headquarters. The seizure, USA Today reports, came at the request of Istanbul’s Chief Public Prosecutor’s office, which filed terror charges against the outlet. Officially, the Turkish government accused the paper of planning a coup alongside a political rival. Riot police dowsed protesters in tear gas and water cannon fire later on, making way for the main event.

Two reporters, Daily Zaman editor-in-chief Abdulhamit Bilici and columnist Bulent Kenes, were fired. A day later, USA Today reports, the once adversarial outlet ran all pro-government stories, never mentioning the raid. “These measures are in no way related to journalistic pursuits”, says Turkish embassy spokesperson in Washington, Fatih Oke. “It was not a journalism issue, it was a homeland security issue.” Turkish officials provided no evidence to support these claims or its subsequent takeover of the outlet.

“This is the latest in a series of troubling judicial and law enforcement actions taken by the Turkish government”, says the White House, “targeting media outlets and others critical of it.” Government officials don’t seem to care whether or not journalists are foreign, all live under the boot of the current regime. Index On Censorship senior advocacy officer Melody Patry points out, “an attempt to silence not only critics but also information that may not be in favor of the government.”

Index On Censorship documents show foreign journalists are often subjected to detention, deportation, and denial of visas. According to USA today, the editor-in-chief and Ankara bureau chief of Cumhuriet–another leading paper–was arrested in November. Spying and “divulging state secrets” were among the charges filed by the Turkish government.

Such measures prove ironic given Turkey’s membership in Europe’s convention for human rights, which upholds press freedoms. Turkey’s government is also a leading coalition partner in the war against the Islamic State, and Syria’s related refugee crisis. Its press stranglehold amounts to a profound injustice against a world yearning for new developments in these regional wars.