“It is forbidden to say that immigration brings crime and terror to our countries.”

If there’s one person who exemplifies anti-refugee sentiment in Europe more than anyone else, it’s not Frauke Petry, it’s not Geert Wilders, and it’s not Lutz Bachmann. It’s Viktor Orban.

Orban raised eyebrows in September of last year, when the Hungarian PM built a 110-mile, razor wire migrant-be-gone fence along his country’s border with Serbia.

But the fireworks began in earnest when dozens of refugees decided to try and break through the barrier. When the asylum seekers tested Orban’s resolve, riot police responded with water cannons and tear gas and that, as they say, was that when it came to traversing Hungary along the Balkan route to Germany.

From that point forward, migrants were diverted through Croatia and Slovenia on the way to Austria and Germany. Some applauded Orban’s efforts to protect the integrity of Hungary’s borders, but many decried what they viewed as an inhumane and xenophobic response to a pressing humanitarian crisis.

To put it lightly, Orban didn’t care about his critics.

In fact, he doubled down on the rhetoric, insisting that his approach was necessary to “preserve Western Europe’s Christian heritage.”

In his most recent slap in the face to Angela Merkel and anyone else in the bloc who supports her open-door policy, Orban called for a referendum on Europe’s quota system.

“Nobody has asked the European people so far whether they support, accept, or reject the mandatory migrant quotas,” Orban proclaimed, at a press conference late last month. “The government is responding to public sentiment now: we Hungarians think introducing resettlement quotas for migrants without the backing of the people equals an abuse of power.”

“This is a fundamental, unavoidable, essential question of Hungarian politics: can anyone else decide for Hungarians who we Hungarians should or should not live with?,” he asked.

Not one to let sleeping dogs lie, Orban is back at it, this time positing a Brussels conspiracy to turn the bloc into the “United States of Europe.”

Speaking at an event to celebrate Hungary’s 1848 revolution against the Habsburgs, Orban proclaimed that “the time has come to ring the alarm bells and gather allies” in an effort to thwart Brussels’ scheme. “If we want to stop the mass migration, first we must put the brakes on Brussels,” he said.

As AP notes, “Hungary granted some sort of international protection to just 508 people last year.” Those who received protection were “real refugees,” the country says, drawing a distinction between those asylum seekers and the river of migrants that’s now cut off from the country via Orban’s fences on the Serbian and Croatian borders. Here are more excerpts from today’s speech at the National Museum:

“The truth is not allowed to be said.”

“Mass migration is a slow water which erodes the shore with a persistent flow. It masquerades as a humanitarian issue but its true nature is to occupy space.” 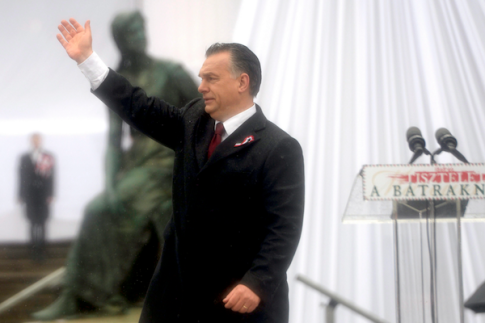 Meanwhile, EU President Donald Tusk traveled to both Cyprus and Turkey on Tuesday ahead of yet another summit in Ankara on Thursday where EU leaders will once again attempt to hammer out some kind of deal to stop the flow of migrants into Western Europe with Turkisk PM Ahmet Davutoglu who will, as always, simple parrot whatever Erdogan told him to say.

In any event, Orban seems close to being in open rebellion against the powers the be in Brussels and looks hell bent on stoking a nationalistic furor among Hungarians.

When the PM speaks of “gathering allies,” he won’t have to look far. The far-right is on the rise across the bloc and if Brussels doesn’t start paying attention, a whole bunch of eurocrats may find themselves out in the cold – with the migrants.