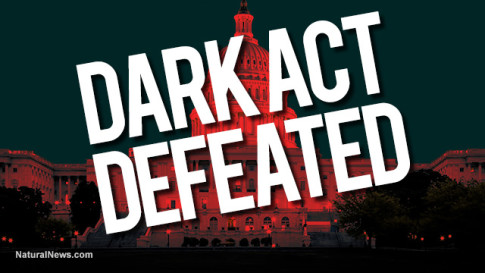 – DARK Act defeated in U.S. Senate as lawmakers receive tidal wave of calls from angry food consumers who are tired of being LIED to about GMO in their food:

The DARK Act was defeated in the U.S. Senate today, achieving a massive victory for consumers and also for the Environmental Working Group, which helped organize large-scale opposition to the bill.

The DARK Act would have outlawed state-level GMO labeling laws nationwide, condemning American food consumers to remaining completely in the dark over the genetically engineered content of their food.

Natural News thanks all our readers who took action to help defeat the DARK Act. We are fighting for your right to know what you’re eating, and with your help, we really can defeat Monsanto and its minions like Ted Cruz. (“Monsatan’s Preacher.”)

I spoke to industry insiders this morning who confirmed that the offices of many U.S. Senators were hit hard with a “tidal wave of calls” from concerned Americans. Even many Republican senators are starting to come around on this issue, and GMO labeling continues to gain steam across the country as food consumers increase their demand for honest food labels and overall food transparency.

The Environmental Working Group released a statement on the victory:

In a major win for consumers, Sen. Pat Roberts (R-Kan.) failed to earn the votes he needed to stop debate on a bill known to opponents as the Deny Americans the Right to Know Act, or DARK Act.

According to EWG, the defeat of the DARK Act offers Congress the opportunity to find a compromise for a national mandatory GMO labeling measure that consumers and industry can support.

“Consumers have made their voices heard to their elected representatives in the Senate and they said clearly, ‘We want the right to know more about our food.’ We are pleased that the Senate made the right decision to stop the DARK Act, and we remain hopeful that Congressional leaders can craft a national mandatory compromise that works for consumers and the food industry. We applaud Senators Debbie Stabenow, Jeff Merkley, Jon Tester, Barbara Boxer and Pat Leahy for their efforts to defeat the DARK Act.”

The defeat of the DARK Act vindicates Scott Faber, who was previously accused by several pro-labeling industry insiders as siphoning money away from state ballot measures (Natural News covered this story and quoted three industry sources). However, it is clear from today’s victory that Scott Faber is working hard for labeling at the national level, and he deserves tremendous credit for today’s victory, regardless of the previous disagreements among labeling advocates in the “states vs. federal” debate.

It’s clear that the Environmental Working Group and the Just Label It campaign are both on the right track so far, and the EWG now tells Natural News that they fully support the Merkley bill created by Sen. Jeff Merkley (D-Ore) which creates a national mandatory standard for GMO labeling.

As explained by Consumers Union:

Consumers Union, the policy and advocacy arm of Consumer Reports, today praised the introduction of the Biotechnology Food Labeling Uniformity Act. The legislation, sponsored by Senator Jeff Merkley (D-Ore.), would create a national standard for GMO labeling and require food manufacturers to label products with GMO ingredients via one of several options on the ingredients list section of the Nutrition Facts Panel. Another option would give FDA the authority to develop a symbol, in consultation with food manufacturers, which would disclose the presence of GM ingredients on packaging.

Jean Halloran, director of food policy initiatives for Consumers Union, said, “This is what real disclosure looks like. This bill finds a way to set a national standard and avoid a patchwork of state labeling laws while still giving consumers the information they want and deserve about what’s in their food. This compromise offers food companies different labeling options and ensures that all consumers – no matter where they are in the country or whether they own a smartphone – have the information they overwhelmingly say they want. We urge Senators to support this proposal as they move forward on GMO labeling legislation.”

Merkley’s bill comes the day after the Senate Agriculture Committee voted to move forward an anti-consumer bill that would preempt state GMO labeling laws and direct USDA to develop duplicative standards for voluntary labeling and promote biotechnology. The legislation, which is supported by biotech giants and some of the country’s largest food companies, is the latest attempt to block a Vermont law requiring labeling on the package of genetically engineered food sold in the state before it goes in to effect July 1.

Consumers Union is urging consumers to call on their lawmakers to oppose preemption of state GMO labeling laws, and to support meaningful, mandatory on-package labeling for GMO foods, including engineered animals like salmon and engineered produce and processed food. To learn more, visit ConsumersUnion.org/RightToKnow.