Update: Despite the stern protests of such legal luminaries as Cruz and Rubio, Clinton and Sanders, Romney and MSNBC, that “clearly” trump was guilty of inciting violence at his rallies, moments ago BuzzFeed reported that Sheriff’s officials in North Carolina said that Donald Trump will not face charges for possibly inciting riot-like conditions at a rally where one of his supporters punched a protester.

The Cumberland County Sheriff’s Office had been looking into “the potential of whether there was conduct on the part of Mr. Trump or the Trump campaign which rose to the level of inciting a riot” in Fayetteville, a statement said. But later in the day, investigators determined there wasn’t enough evidence to pursue the case.

In a statement, the sheriff’s office said “legal counsel advised, and the sheriff concurred, that the evidence does not meet the requisites of the law as established under the relevant North Carolina statute and case law to support a conviction of the crime of inciting a riot.”

And now, we expect more provocations and more attacks and assaults, until finally a sympathetic enough sheriff is found, one who will charge Trump with something, even if that something is a “panicking” establishment which these days means virtually every other candidate.

Over the past week, all anyone wants to talk about in the political arena is who’s to blame for escalating violence at Donald Trump rallies.

Trump blames protesters. Once upon a time the GOP frontrunner relished the jeers from the back of the arenas he packed, saying getting the cameras on them was the only way that the media would show how large his crowds are.

More recently, he’s gotten frustrated after being nearly attacked on stage and after having to cancel a rally in Chicago. He now says he may press charges against protesters and have them jailed so they can explain to their “moms and dads” why they can’t get a job.

In last night’s Democratic town hall event, both Hillary Clinton and Bernie Sanders decried Trump for intentionally getting both his supporters and his detractors riled up to the point that both sides resort to physical confrontation. He even suggested he would pay the legal bills of a supporter that punched a protester.

Here are the excerpts from the story:

Last week, Trump visited Concord and Fayetteville in rallies that attracted thousands of attendees. During the rally in Fayetteville, a protester was assaulted as he was escorted from Crown Coliseum by police. A Linden man was later charged in the incident, and Cumberland County Sheriff’s Office investigators said Monday that they are considering filing a charge of inciting a riot against Trump. 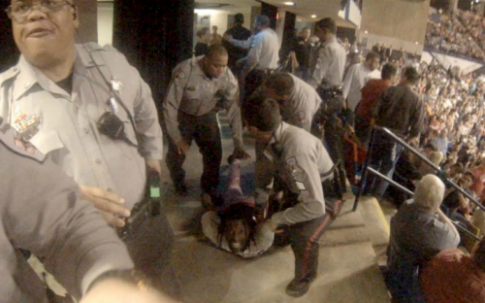 The Fayetteville incident preceded an even uglier scene at a Trump rally in Chicago. He canceled an event planned for Saturday evening after supporters and protesters who packed a hall at the University of Illinois at Chicago clashed

The protests weren’t as vocal Monday, and Trump supporters quickly drowned out demonstrators with shouts of “USA” and “Trump.”

Trump addressed the issue by denying suggestions that he incites or even condones violence at his rallies, calling the events “love fests.”

And so, if this wasn’t already a circus, it certainly is now, with Trump threatening to press charges against protesters for essentially inciting riots at his rallies and a North Carolina Sherriff’s Office prepared to possibly file charges against Trump for doing the exact same thing.

Aparently, however, there are conflicting reports. Here’s The Daily Beast:

WRAL first reported Monday that the department is reviewing whether to nail the Republican frontrunner after a protester was beaten by the candidate’s supporters during a rally last week. According to department spokesman Sgt. Sean Swain, the sheriff appeared on a local radio show earlier in the dayand was asked whether the department had looked into applying the state’s riot laws against Trump—it was something “they had looked at,” Joyce reportedly said. However, Swain told The Daily Beast on the record, Trump’s actions ultimately did not fit the statute. “We would have made the charges by now” if that were the case, the spokesman added.

One hour later, the department issued a statement, under Swain’s name, saying that “We are continuing to look at the totality of these circumstances… including the potential of whether there was conduct on the part of Mr. Trump or the Trump campaign which rose to the level of enciting a riot.”

If anyone thinks they’ve seen Trump incite a riot thus far, just wait until you see what will happen at the GOP convention if they try to rob him of the nomination in front of a crowd in broad daylight.

As Bloomberg put it earlier today, describing the hypothetical scene: “Trump supporters within the arena who see the vise closing on his chances to be nominated could respond in rage. Trump himself will likely be egging on an insurrection, from within the hall and amplified by his running commentary on Twitter and in broadcast interviews.”