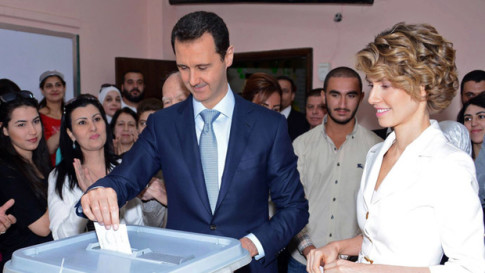 – Syrian elections to be held in 18 months: UN envoy:

The UN envoy to Syria Staffan de Mistura announced on Friday that UN-supervised Syrian elections should be held in 18 months.

“New elections should be held 18 months from the start of [peace] talks, this is from 14 March,” de Mistura told the Russian RIA Novosti state news agency.

“The elections, both presidential and parliamentary, will be under UN observation.”

The latest round of negotiations are expected to take place on Monday, a day before the sixth anniversary of the conflict which has displaced over half of the population and killed more than 270,000 people.

De Mistura said that the first question on the agenda to be discussed will be “an inclusive new government” followed by a new constitution and elections.

“I hope that during the first stage of talks, we reach progress at least on the first question,” he said.

De Mistura’s UN plan seems to clash with the Syrian government’s recently announced timeframe for elections. In February, shortly after the US and Russian-negotiated ceasefire went into effect, President Bashar al-Assad declared in a decree that parliamentary polls will be held in April. The decree included seat allocations for each of the 15 provinces in Syria.

However, the government-tolerated opposition party on Thursday called for a general boycott of the parliamentary elections, accusing the government of using the vote to gain leverage in the peace talks.

The National Coordinating Committee for Democratic Change (NCCDC) said it has “decided to boycott” the 13 April parliamentary polls.

In a statement posted on Facebook, the party announced that its members will neither run for office nor cast their ballots, and called on other “opposition forces and civil society to join the boycott”.

The last parliamentary elections were held in May 2012 but were widely ridiculed for their lack of transparency, failure to include any serious opposition and also timing, given that conflict was already engulfing parts of the country.

Assad also hosted a presidential election in 2014, which was only held in government areas and in which he secured almost 90 percent of the vote.

While a two-week tentative ceasefire appears to be holding depsite violations, the situation in Syria is extremely fragile.

A report by 30 Syrian and international humanitarian organisations, including Oxfam, CARE and the Syrian American Medical Society stated that 2015 was the worst year for civilians, and blamed UN Security Council members for failing to stop the violence.

“The fifth year of the Syria conflict was the worst yet for people as warring parties have continued to wreak havoc, increasingly blocked aid and placed more communities under siege,” the report said.

“Russia, the United States, France and the United Kingdom must now safeguard the glimmer of hope that the ceasefire has brought to civilians, rather than ‘adding fuel to the fire’,” the report said.

“Permanent members of the [Council], are not only failing to ensure implementation of the resolutions but -through inadequate diplomatic pressure, political and military support to their allies, and direct military action -have actively added fuel to the fire of the Syria conflict,” the report added.
A Syrian man rides his bicycle past the rubble of destroyed buildings on 7 March 2016 in the rebel-held town of Douma, on the outskirts of the capital Damascus (AFP)
In January, the United Nations said that 13.5 million people out of a pre-conflict population of 23 million had been forced from their homes.

At least 4.7 million Syrians have fled to neighbouring countries, where the majority face poverty, health problems and growing tensions with local communities. Many live in makeshift camps and face significant restrictions on integration.

According to the British-based Syrian Observatory for Human Rights, more than 270,000 people were killed over the course of almost six years,

The Observatory, which relies on a large network of doctors and activist sources across the country, said that among those killed are around 80,000 civilians, including 13,500 children.

Far more people are feared dead, however, with an unknown number killed in detention at the hands of the government, rebels or militants.

Last month, the Syrian Centre for Policy Research said that the death toll is twice of what has been reported, amounting to 470,000 killed.