No risks? Here are some of my latest posts:

– Vaccines Explained (In One Cartoon)

– Truthstream News: About All Those Vaccines … (Video)

– This is the Best Explanation of the Vaccine/Autism Connection I’ve Ever Heard! (Video)

Here you can look at all entries I’ve tagged under “vacination”: 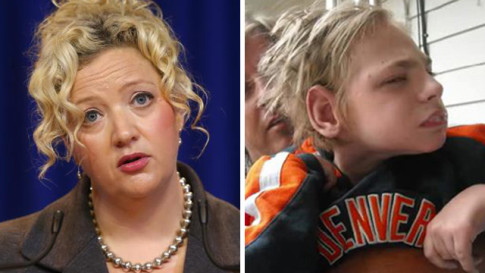 An Australian Health Minister named Jill Hennessy has just uttered the most insanely stupid, anti-science quackery ever recorded on the subject of vaccines. As part of her imperial push to poison and cripple as many Australian children (including Aborigine children) as possible, she has publicly insisted that there are “no risks in vaccinating children.”

Australia is a vaccine police state run by pro-vaccine terrorists who threaten, intimidate and engage in the physical assault of people who speak out against the false narratives of so-called “vaccine safety.” Jill Hennessy empowers these vaccine terrorists when she utters such insanely stupid statements, and she puts the lives of tens of millions of children at risk.

Read more articles on the sheer stupidity of this Australian Health Minister at GlobalFreedomMovement.org and NoCompulsoryVaccination.com.

My own video commentary on Jill Hennessey — where I call her a dangerous child-murdering sociopath who needs to be removed from public office — is available at this link on YouTube.

This again illustrates perfectly the agenda of the Australia Government. An agenda that considers those harmed by vaccines as not even existing. One can only imagine the mentality of a person who has no empathy for their fellow Australians. Let alone one in charge of Health and Human Services. These people do not care about you or your health but only doing what they’re told by their corporate masters.

I don’t need to sit here and provide examples of vaccine injury. A simple internet search for the term Vaccine Injury will net you over 3 million results.

Please feel free to contact Health Minister Jill Hennessy and let her know how to use Google. Or if you’re the parent of a vaccine damaged child please contact her and let her know you exist and want a retraction of that irresponsible propaganda statement.

Watch my full commentary — which includes photos of vaccine-damaged children that Jill Hennessy claims do not exist — in the video below:

Here’s a video revealing some of the stories of vaccine-damaged children, told from the point of view of their sobbing parents. Jill Hennessy says that all these moms are liars who are inventing fake stories for some unknown reason. That’s how insanely evil pro-vaccine pushers like Hennessy truly are. Truly, they are child murderers and medical mafia terrorists who condemn moms as liars when their children are maimed and sometimes even killed by vaccines.

See Truthwiki entries on HPV vaccines like Gardasil, the scientific truth about mercury in vaccines and the truth about autism and Asperger’s Syndrome.