– Hillary Clinton is ROLLING in Big Cash from her ‘Big Enemy’ – Big Pharma:

Pharmaceutical companies have donated hundreds of thousands of dollars in the 2016 presidential election cycle. Guess which presidential candidate accepted far more campaign cash than any other from Big Pharma? The money went to…drum roll please...Hillary Clinton. What’s more, Clinton says she’s proud to have drug companies as her enemies. 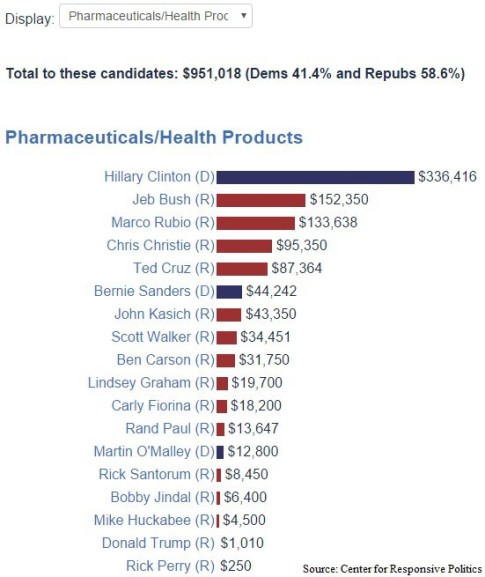 Those who think you can’t buy position in America are sorely mistaken. If there was truly any democracy left in this country, then I’d like for someone to show me.

If we are supposed to be a system of government by the whole population or all the eligible members of a state, typically through elected representatives, how does Cargill, Ely Lilly, or Turing Pharmaceutical get to determine who runs the country?

Clinton has been acting as though she has a tough stance on the industry, especially after news of Turing Pharmaceutical’s CEO Martin Shkreli increasing the price of an HIV drug called Daraprim by nearly 5,000%. But the money trail tells a different story.

Clinton accepted $164,315 in the first six months of her campaign for President from drug companies, according to an analysis by Stat News.

Clinton unveiled a plan to combat rising drug prices by clamping down on the rules for pharmaceuticals, and in a recent Democratic debate, she listed off drug companies among the enemies she is most proud to have made in politics. Really?

These big, bad companies continue to be big spenders, donating $951,018 to presidential candidates in the 2016 presidential election, according to the Center for Responsive Politics and the Federal Election Commission – including to hercampaign.Clinton collected $336,416 in donations from the pharma/health industry, over a third of the total contributions during the 2016 presidential campaign. The next biggest recipient was Republican candidate Jeb Bush, who collected less than half the amount of Clinton. Trump received a whopping $1001 – enough to buy one Daraprim pill.

These donations don’t include the big money corporations spend on lobbying Congress as well. For example, Pfizer, one of the largest pharmaceutical companies, spent more than $10 million in lobbying efforts last year.

Big Pharma bets on established candidates that they think they can influence once they are in office. Scott Swenson, vice president for communications for Common Cause, a nonprofit political watchdog group, says:

“Established industries and lobbies give primarily to establishment candidates that they perceive will be leaders and eventual nominees.”

The health industry overall — combining health professionals, hospitals, HMOs and pharmaceutical companies — donated over $9.5 million to the 2016 presidential candidates, making it the third largest donating industry. Clinton is still the top beneficiary from this group, receiving more than $3.5 million in donations.

Clinton is also a big supporter for Big Biotech and GMOs – check it.