There are two sides in the global war against cash. On one side are many of the world’s governments, central banks, fintech firms, banks, credit card companies, telecommunication behemoths, financial institutions, large retailers, etc. According to them, the days of physical currency are numbered, so why not pull the plug already, beginning with the largest denomination bills such as the $100-note and particularly the €500-note?

On the other side are people who like to use cash – most of whom, according to the dominant official narrative, are either criminals or terrorists. After all, they must have something to hide; otherwise, why would they use a private, untraceable (not to mention archaic, dirty, dangerous and unhygienic) form of payment like cash?

The powers that want to kill off cash already have vital technological and generational trends firmly on their side, along with widespread public ignorance, apathy, and disinterest. But in recent weeks the unlikeliest of defenders of physical money has emerged: the national central bank of Europe’s biggest economy, the German Bundesbank.

“I have my doubts that introducing a cash limit or getting rid of bigger denominations can really prevent terrorists or criminals from engaging in illegal activities,” Carl-Ludwig Thiele, Bundesbank board member in charge of cash issues, said in a speech last week. “We also should ask ourselves: what sort of an understanding of government forms the basis of these proposals? Citizens should not be put under general suspicion.”

Thiele is not the first Bundesbank official to publicly defend cash. Bundesbank president Jens Weidmann warned in the Bundesbank’s annual report that killing off higher denomination banknotes, a policy supported by ECB President Mario Draghi, could have a debilitating effect on trust in cash in general and would be “disastrous” if people started to believe cash would be abolished — an oblique reference to the risk of negative interest rates and the escalating war on cash triggering a run on cash.

The European Central Bank no longer produces figures on where high denomination banknotes are issued, but from the onset of the Eurozone in 1999 to the end of 2009, Germany issued almost half of all €200 and €500 bills over the decade.

When a central bank issues physical currency, it gains seigniorage income. It makes loans or buys securities that do bear interest while issuing euro banknotes that don’t, so it makes a profit over time… In the ECB, seigniorage is pooled, but as the largest in the bloc, the Bundesbank gets the biggest chunk of that income.

Whatever the Bundesbank’s motives, its opposition to euthanizing physical currency could end up proving to be a very sizable thorn in cash’s would-be assassins’ hide. Thiele, relentlessly in his speech:

“Quite prominent economists, such as the former chief economist of the International Monetary Fund, Kenneth Rogoff, have called to abolish cash for monetary policy purposes, so that banks could enforce negative interest across the board.”

“This would, in my view, be the wrong response to the monetary policy challenges at the zero lower bound. Instead of financial repression it would make much more sense to discuss how economies could achieve stronger growth again through higher interest rates.”

In its own study on the use of cash, prominently featured on its homepage today, the Bundesbank found that despite all the media hype over the demise of cash, physical currencies still remain king across many advanced economies.

In the study more than 18,500 consumers in Australia, Austria, Canada, France, Germany, the Netherlands, and the United States kept a written record of what payment methods they used. Turns out, consumers still frequently opt for cash at the point of sale, in some countries more so than others. The report included this chart: 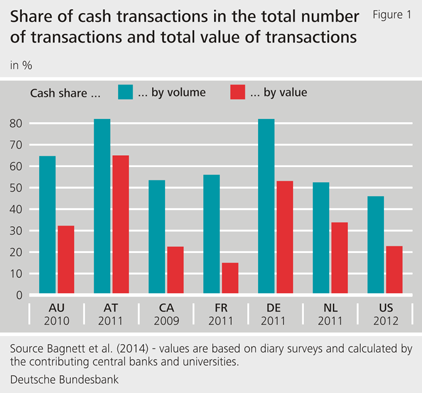 In terms of volume, cash accounted for more than 50% of payment transactions in all of these countries, with the exception of the US. In Germany (DE) and Austria (AT) over 80% of cash transactions were made using cash. In both countries, cash payments also dominated in value. A separate study by the Association of German Banks found that even among millennials, two-thirds prefer paying in cash to electronic means.

What’s crucial isn’t so much the numbers but the very fact that the Bundesbank publishes this type of report so prominently, and in English so that everyone can read it. It’s an obvious part of its campaign to keep cash-in-fist alive as a choice. And in Germany and Austria, the EU’s plans to suppress cash have already provoked a backlash.

“We don’t want someone to be able to track digitally what we buy, eat and drink, what books we read and what movies we watch,” said Austrian Deputy Economy Minister Harald Mahreron on Oe1 radio. “We will fight everywhere against rules” including caps on cash purchases, he said.

Germany’s big tabloid The Bild published a scathing open letter titled, “Hands Off Our Cash,” while a broad spectrum of political parties condemned the proposed measures as an attack on data protection and privacy.

The fact that Europe’s most powerful national central bank is now firmly aligned with the defenders of physical cash could be a vital game changer in the war against cash.

The Bundesbank seems to see the war on cash as a war on personal freedom and choice, in the name of saving a financial system and its absurd negative interest rates:

“We want citizens to be able to pay in whatever form they desire. Especially in Germany, cash is part of that,” said Thiele. And he warned that “freedom always dies bit by bit.” Few countries know that better than Germany. By Don Quijones, Raging Bull-Shit.

Bundesbank President Weidmann had put it this way a couple of weeks ago: “It would be fatal if citizens got the impression that cash is gradually taken away from them.” Read… As War on Cash Escalates, Cash Lovers Fight Back.