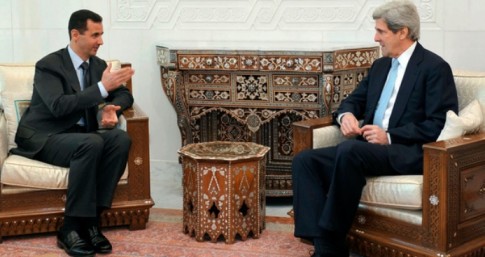 (TFC) Damascus, Syria – It may be hard for many consumers of Western media to remember the original reasons for the Syrian civil war but those who have been paying attention remember the conflict was originally started as an effort to overthrow Syrian President Bashar Al-Assad in a manner similar to Libya. After being billed as a dictator similar to Saddam Hussein in Iraq or Muammar Gaddafi in Libya; Assad was targeted by Western intervention in the same way yet has retained power longer than his enemies ever suspected and has now promised to play his part in ending the conflict in surprising ways.

During the Arab Spring; Western powers began supporting opposition to Assad in Syria in an attempt to overthrow the government. Assad responded to the uprisings in the same way as other nations in the region – such as Egypt, Libya and even Saudi Arabia – did. Despite predictions by Western analysts that Syria would fall the same way the other nations that have had regime change since 2011; Assad managed to hold out like the Saudi regime did in the face of uprisings.

Unlike the Saudis; Assad’s resilience was not supported by the Western military powers and instead the powerful nations continued to bolster opposition that later became violent (with the aid of Western supplied arms and air power.)  The United States led the effort to oust Assad and both countries continued to refuse to negotiate directly with the other.

The game changed in the past year with the added element of direct intervention by Russia in support of their ally’s sovereignty. When the war spiraled too far out of control for the US to have any reasonable hopes of controlling the outcome they still refused to negotiate directly with Assad but have been forced to hold negotiations with the rival world power acting in the region.

Now – after several rounds of negotiations led by the US and Russia – there is someone to negotiate on behalf of the Assad government that the US has much more incentive to cooperate with on some level. With the heightened urgency – in what has become a truly global crisis – to reach a resolution combined with the weight of the competition with Russia to be the dominate nation in the region; it seems Assad is not as unreasonable as we have been led to believe.

Just in the past two weeks Assad has agreed to several conditions that could potentially lead to the more open and “free” Syria that US leaders claimed would be impossible under the current government.

It started on February 22nd; when Assad announced he was open to holding parliamentary elections this April. Now the first days of March have brought an even more incredible offer from the Syrian government that would seem impossible if you only listen to US sources.

On Tuesday, March 1st; Assad announced that his government would be open togranting amnesty to members of the Western and Arab backed opposition forces to help facilitate a more smooth election and peace process to hopefully bring the civil war closer to a final close.

These announcements seem far from something US leaders have led us to believe was possible from the “murderous regime” in Syria. Western allies such as Turkey and Saudi Arabia have continued to oppose – and have actively attempted to subvert – negotiations with Assad for their own reasons yet it seems Assad is more open to attempting to bring about a peaceful solution to the crisis.

The costs of creating a more open and democratic Syria has been devastating to not just one nation but to the Middle East and other regions like North Africa and Western Europe but now it seems that maybe Assad has actually been the reasonable leader in all of this. Perhaps a lesson can be learned from the tragedy in Syria when it comes to future negotiations with opposing nations; if they aren’t approached from a position of hostility from day one maybe we can avoid catastrophes like this in the future.