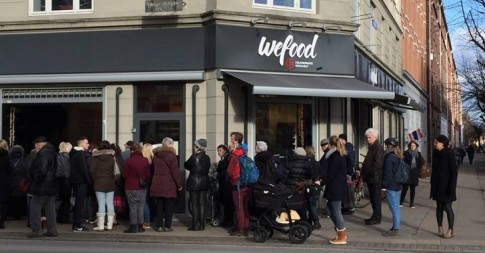 In order to celebrate man’s most valuable freedom — the freedom to choose — Danish volunteers are now giving grocery shoppers the option of purchasing items seen as “unloved” by other major supermarkets in the nation.

According to TreeHugger.com, Denmark’s WeFood grocery store, located in Copenhagen, has a different proposal. Instead of wasting mislabeled products, ugly produce, or items that come in damaged packaging, the brand new grocer wants to offer consumers a choice — and everyone is cheering it.

Each year, TreeHugger reports, 163,000 tons of food are discarded by Danish grocers. In many cases, discarded products aren’t necessarily bad. Instead, consumers are wasting “treats for a holiday that happened last week, a ripped box of cornflakes, plain white rice mislabeled as basmati, or anything nearing its expiration date.”

With that in mind, the WeFood founders decided to sell these perfectly fine products that don’t pass the standards of what consumers usually expect from a typical grocery store. They created a business model based on the idea that consumers have a choice, and if those consumers are comfortable with the fact that what they are consuming may not be ‘acceptable’ elsewhere, they are free to purchase that food.

According to TreeHugger, WeFood is a non-profit run by volunteers and members of DanChurchAid, a charity that “assists the world’s poorest to lead a life in dignity.” DanChurchAid’s Per Bjerre explains that the organization decided to avoid labeling WeFood as a “social supermarket” because “it’s difficult to get customers to go there. Who wants to be poor?”

“If you want to stop [the] waste of food, everybody has to be into it.”

Unlike grocers that focus on selling surplus food to people with limited means, or so-called “social supermarkets,” WeFood targets the general public.

According to NPR, the idea is a hit. Ever since WeFood opened its doors on February 22, people have been “lining the sidewalks each day” to shop there. But the success comes with new problems. According to TreeHugger, the store is running out of food almost every day — something DanChurchAid volunteers didn’t expect.

Some of the customers who visit WeFood, TreeHugger reports, “are low-income people looking for a deal,” but often, they visit WeFood mostly “for more political reasons.”

Recently, France made it illegal for supermarkets to throw out unsold food, but the effort in Denmark is different. Instead of pressuring government authorities to impose this approach on all other grocers, WeFood is quickly becoming a hub for “unloved food,” boosting the local economy and providing a major boost to consumers’ power of choice.

“While all other animals are unconditionally driven by the impulse to preserve their own lives and by the impulse of proliferation,” the late economist Ludwig von Mises wrote in his celebrated book, Human Action, “man has the power to master even these impulses.”

Man, Mises concluded, “is capable of dying for a cause or of committing suicide. To live is for man the outcome of a choice, of a judgment of value.”