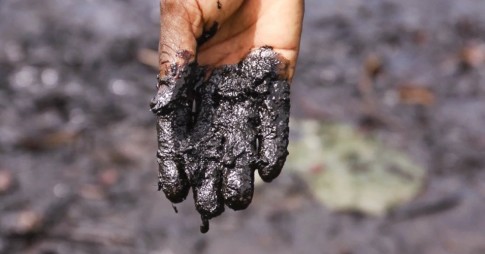 Two new lawsuits say Shell is liable for oil spills that have destroyed livelihoods, contaminated water supplies, and rendered some wetlands ‘lifeless’ in the fragile ecosystem

Royal Dutch Shell must pay for the lives and livelihoods destroyed by the decades-long deluge of oil spilled from its pipelines in the Niger Delta, two lawsuits filed in London on Tuesday charged.

“Shell has an appalling record of obfuscation and misinformation with regard to its dealings in the Niger Delta,” said Peter Frankental, director of Amnesty International’s UK Economic Affairs Programme.

The two latest cases were filed on behalf of the Bille and Ogale communities in the Ogoniland region. The British firm behind the lawsuits, Leigh Day, charged that Shell’s pipeline infrastructure is in such bad shape that continual oil spills “caused, and continue to cause, long-term contamination of the land, swamps, groundwater and waterways” in the Ogale community.

It also claimed that pipeline breakages have destroyed the livelihood of the 13,000 residents of Bille, who traditionally fish to sustain themselves, and that the spills have grown so extensive that residents “have even been forced to stack sandbags outside their homes to try to prevent oil entering their properties.”

There’s something in the air…

This week’s lawsuits follow an unprecedented £55 million ($77.4 million) settlement paid out by Shell in 2015 to residents of the region’s Bodo community for spills that happened in 2008.

“In papers filed in the UK court prior to [the 2015] settlement,” Amnesty International wrote in a recent briefing (pdf), “Shell admitted that its previous and often repeated assertions regarding the volume of oil spilt and area affected were substantially incorrect.”

“Court documents also revealed that internal emails and reports showed that senior Shell employees had expressed concern as far back as in 2001 of the need to replace oil pipelines in the Niger Delta,” the humanitarian group wrote, “describing some sections as containing ‘major risk and hazard.’”

Amnesty International’s briefing warns investors of the UN-declared “public health emergency” created in the region by decades of spills and negligence, pointing out the company’s liability in claims such as the suits filed this week and laying out a case for divestment from Shell.

The Niger Delta “has endured the equivalent of the Exxon Valdez spill every year for 50 years by some estimates. The oil pours out nearly every week, and some swamps are long since lifeless,” the New York Times reported back in 2010.

A Times editorial from 2014 details the darkest moments of Shell’s 60-year presence in the region, a legacy the newspaper’s editorial board characterizes as “devastating”:

Shell discovered oil in Nigeria in 1956, and, ever since then, the people of Ogoniland have suffered from air, land and water pollution. The United Nations study found cancer-causing benzene present in drinking water at 900 times the World Health Organization guidelines. Shell stopped drilling in Ogoniland in 1993 after local protests, but its pipelines still cross the region. The 1995 sham trial and execution of celebrated activist Ken Saro-Wiwa and eight others who had protested oil exploitation in Ogoniland remains one of the darkest blots on Nigeria’s history.

“We hope that the Bodo case and this new lawsuit will spur Shell on to accept its responsibilities by cleaning up the oil spills,” Frankental said, “and compensating those in the Niger Delta whose lives have been devastated by them.”