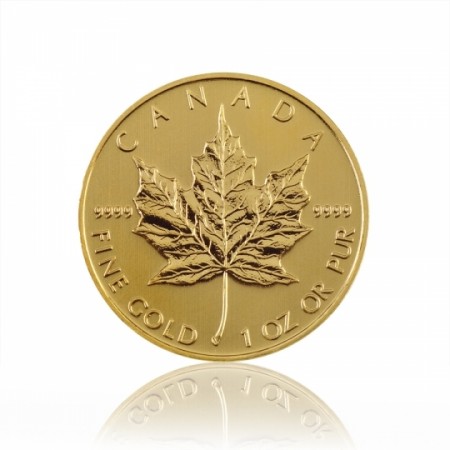 – It’s Official: Canada Has Sold All Of Its Gold Reserves:

One month ago, when looking at the latest Canadian official international reserves, we noticed something strange: Canada had sold nearly half of its gold reserves in one month. According to the February data, total Canadian gold reserves stood at 1.7 tonnes. That was just 0.1 per cent of the country’s total reserves, which also include foreign currency deposits and bonds.

As we noted, the decision to sell came from Finance Minister Bill Morneau’s office.

“Canada’s gold reserves belong to the Government of Canada, and are held under the name of the Minister of Finance,” explained a spokesperson for the Bank of Canada on Wednesday. “Decisions relative to gold holdings are taken by the Minister of Finance.”
Reached by Global News on Wednesday evening, a spokesperson for the finance department said the sale “was done in the normal course of business for the government. The decision to sell the gold was not tied to a specific gold price, and sales are being conducted over a long period and in a controlled manner.”

This latest sell-off is indeed part of a much longer-term pattern of moving away from gold as a government-held asset. According to economist Ian Lee of the Sprott School of Business at Carleton University, Ottawa has no real reason to keep its gold reserves other than adhering to tradition.

“Under the old system, (gold) backed up currencies,” Lee explained. “The U.S. dollar was tied to gold. One ounce was worth US$35. Then in 1971, for lots of reasons I won’t get into, Richard Nixon took the United States off the gold standard.”

Gold and dollars were interchangeable until that point, he said, but in the modern financial world, the metal is no longer considered a form of currency.  “It is a precious metal, like silver … they can be sold like any asset.”

The amount of gold the Canadian government holds has therefore been falling steadily since the mid-1960s, when over 1,000 tonnes were kept tucked away. Half of those reserves were sold by 1985, and then almost all the rest were sold through the 1990s up to 2002.

By last year, Canada’s reserves were down to just three tonnes, and the latest sales have now halved that. At the current market rate, the value of 1.7 tonnes of gold comes in at just under CAD$100 million, barely a drop in the bucket when you consider the broader scope of federal finances.

According to Lee, there may soon come a time when Canada’s gold reserves are entirely a thing of the past. There are better assets to focus on, he argued, calling the government’s decision to dump gold “wise and astute.”

Lee was right, because fast forward one month when earlier today Canada’s Department of Finance released its latest official international reserves and as of this moment it’s official – Canada has fully “broken away with tradition” and has exactly zero gold left. 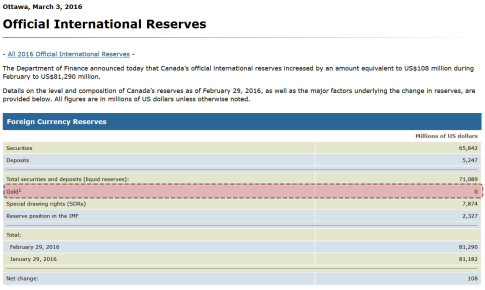 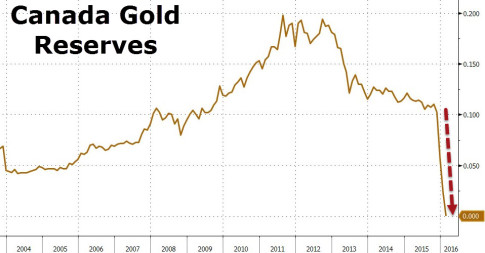 This is what it said:

And now, Canada can focus on buying “better assets.” As to whether “the government’s decision to dump gold was wise and astute”, we’ll check back on that at some point in the near future.

1 thought on “It’s Official: Canada Has Sold All Of Its Gold Reserves”