When you talk to journalists from the U.S. or the UK, they often seem to think that Sweden is a humanitarian superpower that has received refugees because the Swedish government is following some ideology based on doing good deeds.

That Sweden is a humanitarian superpower, eager to lead by example, is a myth that needs exposing once and for all. The recent migration wave to Sweden has made some people poor and others very, very rich.

Every day one reads news in Sweden about the winners and the losers in the migration industry. One of the winners in Sweden’s migration industry is ICA Bank. In November 2015, it invoiced the Swedish Migration Agency $8 million for providing asylum seekers prepaid cards. For every cash withdrawal, ICA Bank takes a $2 fee, and for every prepaid card activated, it takes $21. ICA Bank won the contract without any competition; its contract with the Migration Agency extends to March 2017.

In November 2015, it was reported that Sweden’s Migration Agency had paid $174 million during an 11-month period to private sector property owners for asylum seekers’ accommodation.

The biggest private company running asylum accommodations, Jokarjo AB, is owned by Bert Karlsson, known in Sweden primarily as director of a record label. In the early 1990s, Mr. Karlsson was the leader and founder of a political party, New Democracy, that advocated reducing immigration to Sweden. Between 1991 to 1994, as a representative of his party, he sat in the Swedish parliament. In 2015, his company billed the Swedish Migration Agency $23.9 million. Mr. Karlsson explained his business plan for running a home for asylum seekers in a simple sentence: “My idea is to make it cheaper and better than anyone else.”

One can only imagine the situation for asylum accommodations run by minor private operators.

This is what the Swedish “humanitarian superpower” is actually about. It is all about money, and it is about winners and losers.

Here are a few of the violent incidents that happen every day:

On January 25, 2016, the police arrived at an asylum accommodation in Annerstad, southern Sweden, after hearing of a brawl there between Syrians and Afghans. When the police arrived, according to their report, no one — not even the people working there — could speak Swedish.

If liberal journalists outside Sweden believe that rape is humanitarian, then Sweden has a humanitarian migration policy.

What is actually happening in Sweden, however, is that private companies are making millions of dollars at taxpayer expense, while the newly arrived migrants are living a horrible existence in which rape and other abuses are a part of daily life. This is what other European countries will experience if they follow Sweden’s liberal migration policy.

Another part of the migration industry that has grown of late are foster homes for unaccompanied refugee children. In February, reports surfaced that one of the heads of the Swedish Migration Agency also runs the private company, Starkfamn Familjehem AB: a business that provides foster homes to unaccompanied refugee children. It is not only people in the private sector are making money from the migration industry, but also people working inside the state apparatus who want to do well. 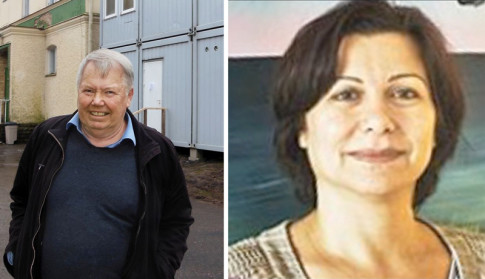 The biggest private company running asylum accommodations is owned by Bert Karlsson (left). In 2015, his company billed Swedish taxpayers $23.9 million. His homes require asylum seekers to buy their own toilet paper, apparently despite having agreed with the Migration Agency to provide asylum seekers with toilet paper, sanitary napkins and diapers. Wafa Issa (right) is head of the Migration Agency for the Stockholm region. She also runs a private company that is paid to provide foster homes to unaccompanied refugee children.

One of the losers is the Swedish police. They have reported that they can no longer cope with their jobs because they cannot handle the hundreds of young men in Sweden right now from Morocco and other countries in North Africa.

Although a small clique in Sweden have become millionaires because of the migration industry, the schools, police, social services and taxpayers in Sweden have lost a lot and have a difficult and uncertain future. There will be major conflicts in Sweden. There is nothing “noble” in Sweden’s migration policy. The Swedish migration model, far from being a good example of how a migration policy should function, is an embarrassment and a disaster, and its final result is chaos, conflict, and corruption.