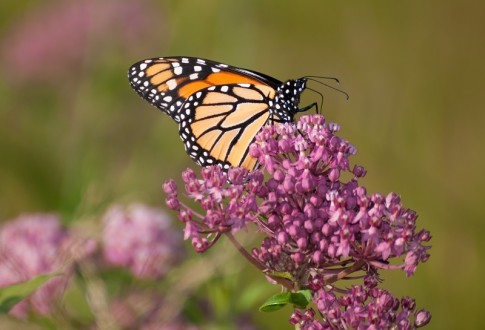 When people think of butterflies, one of the most common species that enter their mind is the Monarch butterfly.

The Monarch butterfly has the vibrant orange and black pattern that most people recognize. It’s known for its beauty and its intense migration from the United States to Mexico during winter time. In the past few years, it has also been known for its dwindling numbers.

During winter, the Monarch butterfly confines itself to its habitat in the forests of Michoacán State and Mexico State. There the butterfly clings to the branches, with others of its species, covering acres of trees in blankets of beautiful Monarch patterns.

“Insects are very susceptible to these ups and downs,” Omar Vidal, director general of the World Wildlife Fund in Mexico said, according to the New York Times.

Vidal was trying to explain the normal swings in insect population, but he also explained that the dip in population where the Monarch butterfly was concerned was well in the abnormal range.

In 2014, the population count of the Monarch butterfly began to rise a little bit. During the winter hibernation period, the butterfly species covered approximately 2.8 acres of forest.

Despite the small rise in population, scientists were concerned for the iconic butterfly species.

The Monarch butterfly is a fragile species. They are severely affected by illegal logging in Mexico and a decline of their main source of food and breeding (milkweed) in the United States. They are also highly affected by weather changes.

In 2002, a winter storm killed a rough estimate of 500 million Monarch butterflies. That one winter storm wiped out a huge portion of the beautiful species. More were wiped out in that storm than currently exist between the United States and Mexico today.

This year, however, the Monarch butterfly seemed to be making a significant comeback.

The World Wildlife Fund has reported that the Monarch butterfly species is currently covering approximately 10 acres of forest in Mexico this winter. A huge rise from last winter’s 2.8 acres.

“The increase in Monarch numbers is great news for sure, but the bottom line is that these butterflies must reach a much larger population size to be resilient to ever-increasing threats,” Tierra Curry, a senior scientist at the Center for Biological Diversity, explained in a press release issued by the Center for Biological Diversity. “So this much-loved butterfly still needs Endangered Species Act protection to make sure its amazing migration will endure for generations to come.”

“Monarch populations are still severely jeopardized by milkweed loss in their summer breeding grounds due to increasing herbicide use on genetically engineered crops,” George Kimbrell, a senior attorney at Center for Food Safety, said in the same press release. “Only Endangered Species Act protection will provide the scientific and legal blueprint that is needed to ensure the future [of the Monarch butterfly].”

In 2014, the Center for Biological Diversity petitioned the Fish and Wildlife Service, asking for the Monarch butterfly to be protected by the Endangered Species Act with a classification of “threatened.”

The Fish and Wildlife Service agreed that the Monarch butterfly might qualify for protection and began a review. The service had not returned a decision by the beginning of 2015, and the Center for Biological Diversity threatened to file a suit if the service didn’t issue a verdict in a timely manner.

There has been no decision made as of this time.