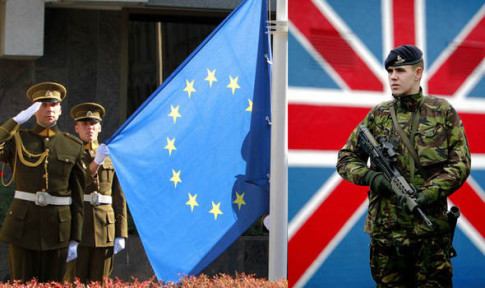 – End of the British Army? EU plots ‘scandalous’ military merger if UK votes to stay in:

THE EU is to launch a £3 BILLION defence research and development programme with the ultimate aim of merging the continent’s militaries into one gargantuan Euro army, Express.co.uk can exclusively reveal today.

Brussels bureaucrats are railroading through contentious plans to vastly expand the European Union’s military scope which could ultimately end with the British army being subsumed into a vast continental force.The UK military could also be forced to share highly sensitive weapons technology – which we have spent millions of pounds of taxpayers’ money developing – with the rest of Europe under an agreement to boost military cooperation between member states.

Britain would also be expected to contribute around £375million to the scheme – enough to rehire all of the 20,000 soldiers the Government sacked in its last defence spending review.