As the Apple vs. FBI battle rages in the court system and throughout the halls of Congress, Obama decides to do what he does best. Using “his pen” to make consequential decisions unilaterally. 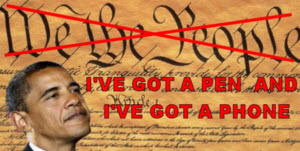 Just another day in the American banana republic.

WASHINGTON — The Obama administration is on the verge of permitting the National Security Agency to share more of the private communications it intercepts with other American intelligence agencies without first applying any privacy protections to them, according to officials familiar with the deliberations.

The change would relax longstanding restrictions on access to the contents of the phone calls and email the security agency vacuums up around the world, including bulk collection of satellite transmissions, communications between foreigners as they cross network switches in the United States, and messages acquired overseas or provided by allies.

The idea is to let more experts across American intelligence gain direct access to unprocessed information, increasing the chances that they will recognize any possible nuggets of value. That also means more officials will be looking at private messages — not only foreigners’ phone calls and emails that have not yet had irrelevant personal information screened out, but also communications to, from, or about Americans that the N.S.A.’s foreign intelligence programs swept in incidentally.

Robert S. Litt, the general counsel in the office of the Director of National Intelligence, said that the administration had developed and was fine-tuning what is now a 21-page draft set of procedures to permit the sharing.

Until now, National Security Agency analysts have filtered the surveillance information for the rest of the government. They search and evaluate the information and pass only the portions of phone calls or email that they decide is pertinent on to colleagues at the Central Intelligence Agency, the Federal Bureau of Investigation and other agencies. And before doing so, the N.S.A. takes steps to mask the names and any irrelevant information about innocent Americans.

The new system would permit analysts at other intelligence agencies to obtain direct access to raw information from the N.S.A.’s surveillance to evaluate for themselves. If they pull out phone calls or email to use for their own agency’s work, they would apply the privacy protections masking innocent Americans’ information — a process known as “minimization” — at that stage, Mr. Litt said.

Executive branch officials have been developing the new framework and system for years. President George W. Bush set the change in motion through a little-noticed line in a 2008 executive order, and the Obama administration has been quietly developing a framework for how to carry it out since taking office in 2009.

Of course. After all, Obama’s entire Presidency has merely been George W. Bush’s third and fourth terms.

The executive branch can change its own rules without going to Congress or a judge for permission because the data comes from surveillance methods that lawmakers did not include in the main law that governs national security wiretapping, the Foreign Intelligence Surveillance Act, or FISA.

FISA covers a narrow band of surveillance: the collection of domestic or international communications from a wire on American soil, leaving most of what the N.S.A. does uncovered. In the absence of statutory regulation, the agency’s other surveillance programs are governed by rules the White House sets under a Reagan-era directive called Executive Order 12333.

Mr. Litt declined to make available a copy of the current draft of the proposed procedures.

“Once these procedures are final and approved, they will be made public to the extent consistent with national security,” Mr. Hale said. “It would be premature to draw conclusions about what the procedures will provide or authorize until they are finalized.”