Have you ever wondered who these people are? The people who decide how much capital should cost, how much credit and cash should be issued. You know, the twits who dream up QE, ZIRP and NIRP.

Where do they come from? Who pays their wages? Where do they get these hair-brained ideas? Are they on medication?

Sadly we probably know most of the answers…

Central bankers are like alcoholics – drunk on stupidity and arrogance; and, like a suffering alcoholic, reticent to address the real problem.

Reading up on the dangers of alcohol, I’m told that it rots your liver, kills brain cells, makes you impotent, fat, gives you stomach ulcers, and eventually causes death.

Obviously too much of it is bad juju.

In a similar fashion, central bankers had an opportunity in the GFC to put the bottle down. But instead they raided the liquor cabinet and have turned our financial system into something grotesque.

Just as an alcoholic can’t cure alcoholism with binge drinking, central bankers cannot and will not cure the current economic malaise with “monetary” binge printing.

Sovereign debt is pretty high on my list of asymmetric opportunities. In fact, in 2014 we published an extensive report covering global debt which included both sovereign and private debt.

Government debt has been growing since 2007 at an annual rate of 9.3% with three quarters of this coming from advanced economies. Talk about binge drinking to cure alcoholism…

One of the wonderful things about binge drinking is that reckless behaviour is best shared with friends. To really let your hair down and release the shackles it’s wonderful knowing that not only are you going to have a wild time, but when the morning comes you can share the hangover with similarly afflicted friends. Commiseration is so much better with company.

So Who Are These Binge Drinking Friends?

Well, here we have a list of the drinkers who need to endure a hangover and deleverage. The chart below is taken from a McKinsey study where they estimated what it would take for a dozen OECD countries to begin deleveraging in terms of fiscal policy and GDP growth.

The chart below shows what additional GDP growth and fiscal adjustment (as % of GDP) would be required to begin deleveraging: 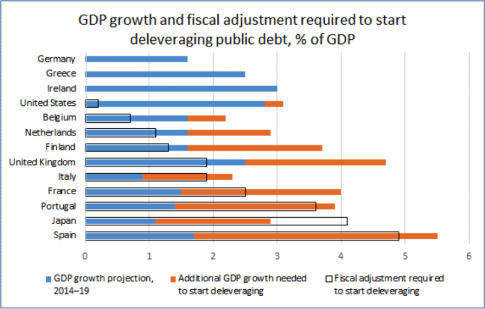 Source: based on data from McKinsey.

The main conclusion: it’s just not possible. And here’s why…

In order to begin deleveraging these countries would need to sustain current GDP growth and budget surplus continuously.

Instead, debts are expected to continue rising.

Missing from the above group is the Middle Kingdom and this is where a lot of asymmetry lies. Principally because few market participants are looking at it.

By international standards, China’s public debt level is rather benign – a mere 50% or so of GDP. But, as with virtually every animal in our sovereign debt zoo, it has a number of peculiarities worth looking at.

It is interesting to note that data on China’s government debt has changed since we did our original Global Debt Report. Below is the chart we took from the Trading Economics website in June 2014:

And this is the chart updated:

The sources have changed, with China’s Ministry of Finance replaced by the IMF, and we can see now with IMF “stats” that in fact the numbers for the previous ten years of data show an almost doubling. Funny that.

This shows how cryptic the Chinese authorities are in disclosing their financial data and how difficult it is to get to the truth. If something is being hidden, it’s probably not a mere omission.

Capital moving into increasingly risky assets accelerated by credit formation have turned the banking sector into a truly enormous $34 trillion monster. At 340% of GDP and finding themselves at the end of the cycle, the need to recapitalize their banking system will become ever more apparent as loan impairment rockets higher.

The market seems to think that the PBOC has sufficient reserves to deal with this problem.

Remember, since 2004 the yuan has appreciated some 60%. This has been a result of the influx of capital chasing Chinese growth as well as deliberate and consistent weakening of its trading partners currencies including the BOJ, ECB and, until recently, the US Fed.

We continue to think that the Chinese will be forced into a binge drinking session of their own, instituting a QE program which will put additional pressure on the yuan. After all, they’ll only be following from their already drunk American and European drinking buddies.

Right now they’re trying to stem capital outflows by opening up their bond markets under the guise of liberalizing their currency and internationalizing it.

“China’s latest move to open up its over $6 trillion interbank bond market allows money to flow into the country at a time of rising capital outflows, and follows smaller moves last year to give foreign investors greater access to China’s labyrinthine capital markets. Foreign investors hold approximately 2% of China’s interbank bond market, which is the third-largest in the world.”

This isn’t the first time we’ve seen this game played. Don’t be fooled.

Buying into Chinese corporate or sovereign bonds will be an excellent trade. But certainly not here and not now.

As this plays itself out there will be opportunities to get long, once the currency has crashed and we’ve closed out short yuan positions, we’ll almost certainly find some Chinese blue chip corporate debt trading in double digit yields.

Right now the game is decidedly on… and that game involves being short.

Great investments are forged in difficult times, and times they are difficult.