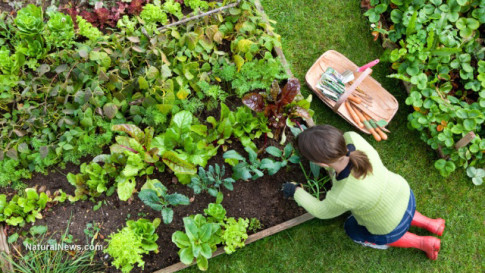 – How gardening can help your immune system:

One of the best ways to protect your children from a lifetime of allergies and autoimmune disorders is to make sure that they – and you – spend plenty of time outdoors getting dirty, scientists are now saying.

That’s because exposure to the naturally occurring microbes in our outdoor environment helps program the developing immune system to learn what types of foreign agents are actually harmless. This prevents it from later attacking innocuous allergens, or even your own body.

“You want your immune system to have a large repertoire of harmless organisms that it has learned not to attack,” said medical microbiologist Graham Rook of University College London. “If you have this, then, because all lifeforms are ultimately built from the same building blocks, you are equipped to recognise almost anything that comes along and mount an appropriate immune response,” he continued, as reported by the U.K.’s Daily Mail.

The idea that exposure to microbes helps program the immune system goes back to 1989, when epidemiologist Prof. David Strachan noted that rates of allergies were rising in Western countries, concurrent with a drop in infectious diseases. He had also found that children with more older siblings were less prone to allergies (and, scientists later discovered, to autoimmune diseases). He suggested that exposure to more childhood infections via older siblings helped “train” the developing immune system.

In the years since, scientists have discovered that the key factor is not actually childhood infection – understandably, since our hunter-gatherer ancestors rarely got many of the “herd” infections that large, urban populations now suffer from. Instead, the immune system is programmed by exposure to parasites and, most of all, harmless microbes that surround us.

Research also suggests that no household – or even urban – environment can be as good for our immune systems as good, old-fashioned dirt, whether from the garden, a farm or the wilderness. For example, a recent study in the Proceedings of the National Academy of Sciences found less diverse microbial flora on the skin of city dwellers than people living in rural areas. The researchers attributed this to less exposure to dirt and animals. This reduced diversity was linked to higher risk of allergies.

Get out and garden!

So how can we build healthy immune systems in our children – and perhaps even re-balance our own, out-of-whack immune systems? Spend time outside! Children and adults should work and relax outside, doing activities from gardening, to hiking, to raising backyard chickens.

“Our outdoor environment is teeming with microbes, most of which are harmless, on every surface,” said microbiologist Sally Bloomfield of the London School of Hygiene and Tropical Medicine. “They are also airborne so we inhale them constantly while we are outdoors.”

Eating a diet high in fruits, vegetables and whole grains, also helps build up your gut flora, as these foods are more likely to maintain higher levels of outdoor microbes. Of course, purchasing from a local farmer’s market will give you the best benefit – or better yet, grow them in your own garden!

What about if you spent your entire childhood indoors? It turns out that getting outside and gardening is just as important for you. According to gut biologist William Parker of Duke University, people who weren’t exposed to enough outdoor microbes as children need to be extra careful to avoid vitamin D deficiency, lack of exercise, stress and poor diet. Gardening addresses all four of these factors!

“All of us have this loss of biodiversity that puts us at greater risk of inflammatory disease,” Parker said. “It means we really have to watch out for these other four factors, and guard against them.”