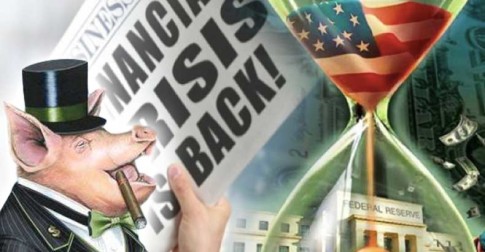 After seven years of benefiting from the greatest transfer of wealth in history, the U.S. banking industry topped it off with record profits in 2015. The Great Fleecing may have reached its height just as the scheme known as Quantitative Easing ran out of gas.

“The U.S. banking industry earned net income of $163.63 billion in 2015, the highest net income of any year in the SNL bank regulatory database, which dates back to 1991…

This bonanza stands in stark contrast to the plight of the middle class, whose wages have stagnated while health insurance costs reach crippling proportions. Wealth inequality in the U.S. has greatly expanded–a trend that defines countries with Quantitative Easing (QE) programs.

The QE scheme cooked up by the Federal Reserve and Wall St. banks is designed to benefit the wealthiest, as Jon Hartley pointed out in Forbes last June:

“Kevin Warsh, a former Fed board member and one of the Brookings panelists, held a different view explaining that quantitative easing as a policy works purely through an “asset price channel” enriching the few who own stocks or other financial products (and not the 96% of Americans who receive the majority of their income through labor).

This mechanism is radically unlike conventional monetary policy of central bank interest rate cuts which work through a “credit channel” benefiting the country’s mortgage borrowers, who make up majority of the population.”

It wasn’t enough that the federal government borrowed trillions off the backs of citizens to bail out the very banks that caused the Great Recession. The same cabal of rich and powerful—our modern version of royalty—then used that event to siphon even more wealth from the middle class under a new game called QE.

Jobs, wages, and the GDP took a back seat to the “too big to fail” Wall St. banks, because they couldn’t trust the plebes with all that money for fear of inflation. As a result, the various schemes these banks engaged in with the free money—including mortgage-backed securities, company mergers, company debt offerings, stock buybacks—did nothing but secure that wealth for the 1%.

The record profits of the banking industry in 2015 make it seem almost comical that Morgan Stanley will pay $3.2 billion to get out of trouble for its part in causing the recession.

“In the deal, the investment bank acknowledges that it misrepresented the risks of mortgage-backed securities leading up to the 2008 housing and financial crisis.

Morgan Stanley knew that it was selling securities backed by residential mortgages with ‘material defects’ — such as loans that were ‘underwater,’ where the loan was larger than the value of the house.”

In the U.S., banks can just give the government money—which it got thanks to Quantitative Easing—to avoid being treated as a criminal. In Iceland, they actually jail bankers who helped cause the recession.

As the QE scheme has run its course, it appears that central banks may have lost control, but not before securing that immense transfer of wealth to the upper echelon.