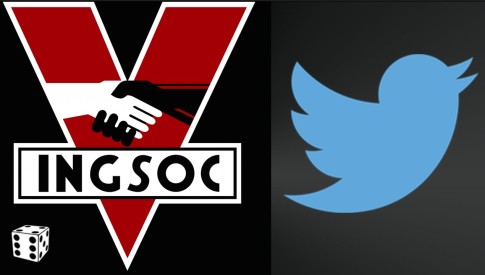 With its markedly ironic title, The Ministry of Truth in George Orwell’s dystopian novel, 1984, is one of the most important agencies of the government. For, as enotes.com writes, an uninformed or misinformed populace can be confused, deceived, and directed easily by controlling powers. Keeping the people confused about who is at war with whom and what is the reality of things causes them to become involved in nothing and, therefore, no threat to the power structure.

With that background in mind, Twitter today unveiled its “Trust & Safety Council.”

To ensure people can continue to express themselves freely and safely on Twitter, we must provide more tools and policies. With hundreds of millions of Tweets sent per day, the volume of content on Twitter is massive, which makes it extraordinarily complex to strike the right balance between fighting abuse and speaking truth to power. It requires a multi-layered approach where each of our 320 million users has a part to play, as do the community of experts working for safety and free expression.

That’s why we are announcing the formation of the Twitter Trust & Safety Council, a new and foundational part of our strategy to ensure that people feel safe expressing themselves on Twitter.

As we develop products, policies, and programs, our Trust & Safety Council will help us tap into the expertise and input of organizations at the intersection of these issues more efficiently and quickly. In developing the Council, we are taking a global and inclusive approach so that we can hear a diversity of voices from organizations including:

We have more than 40 organizations and experts from 13 regions joining as inaugural members of the Council. We are thrilled to work with these organizations to ensure that we are enabling everyone, everywhere to express themselves with confidence on Twitter.

But as reason.com’s Robby Soave notes, a quick glance at its membership roster suggests the council is almost as Orwellian as it sounds—and overwhelmingly biased in favor of speech suppression.

The council includes more than 40 organizations that will be tasked with helping Twitter, “strike the right balance between fighting abuse and speaking truth to power.” But if the goal was really to find some middle ground between total free speech and safeguards against harassment, one might have expect Twitter to solicit some diversity of opinion. In fact, despite the press release’s claim that the council includes a “diversity of voices,” virtually none of the council members are properly classified as free speech organizations. (Full list here).

Some of the groups—such as Hollaback! and the Dangerous Speech Project—don’t think harassment should be criminalized outright. But the vast majority are certainly more concerned about allowing too much speech rather than too little. Notable members include Feminist Frequency—the blog and Youtube channel of anti-Gamer Gate activist Anita Sarkeesian—the Anti-Defamation League, and a host of suicide-and-domestic-violence prevention groups.

Orwell’s creation of this Ministry of Truth that alters history is reflective of the actions of Napoleon, who, upon his conquest of a country, immediately had the newspapers controlled by his governing powers, and it is also much like the government of Communist Russia which virtually rewrote history. During Stalin’s reign, for instance, photographs were altered, many things in print were censored, and enemies of the state were murdered. One prominent and influential politician in the early days of the Soviet Union was Leon Trotsky; however, after he was marked as an enemy of the State, he was erased from the history books because he had led the Left Opposition against Joseph Stalin who had risen to power.

Twitter is a private company. It is free to make whatever speech rules it wants. Forcing Twitter to permit more kinds of speech would not actually be pro-free speech—in fact, it would violate the First Amendment.

But its users are also free to complain that the platform is cracking down on speech they would like it to permit. For my part, I would feel more comfortable if the Trust & Safety Council included at least a few principled speech or tech freedom groups, like the Foundation for Individual Rights and the Electronic Frontier Foundation.

We hope we don’t get banned for saying that.