Earlier today, we highlighted the rather abysmal results reported by Maersk, the world’s largest shipping company.

To the extent the conglomerate is a bellwether for global growth and trade, things are looking pretty grim. Maersk Line – the company’s golden goose and the world’s largest container operator – racked up $182 million in red ink last quarter and the outlook for 2016 isn’t pretty either. The company now sees demand for seaborne container transportation rising a meager 1-3% for the year.

“The demand for transportation of goods was significantly lower than expected, especially in the emerging markets as well as the Group’s key Europe trades, where the impact was further accelerated by de-stocking of the high inventory levels,” the company said, in its annual report.

Just how bad have things gotten amid the global deflationary supply glut you ask?

Worse than 2008 according to CEO Nils Andersen who last November warned that “the world’s economy is growing at a slower pace than the International Monetary Fund and other large forecasters are predicting.” Here’s what Andersen told FT:

“It is worse than in 2008. The oil price is as low as its lowest point in 2008-09 and has stayed there for a long time and doesn’t look like going up soon. Freight rates are lower. The external conditions are much worse but we are better prepared.”

As FT goes on to note, “capacity in the container shipping industry increased 8 per cent in 2015” despite the fact that Maersk only sees global trade growing at between 1% and 3% in 2016. 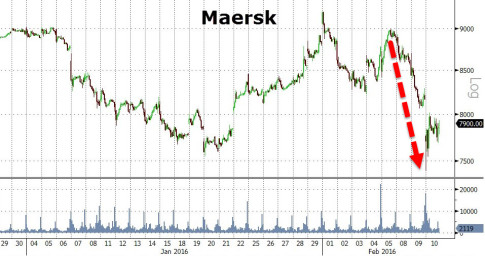 Through it all, Andersen is attempting to strike an upbeat tone: “We are very strongly placed not only to get through this period but benefit from it. We are quite enthusiastic about it,” he said.

Check back in six months to see how “enthusiastic” Andersen is once he realizes the slump in global growth and trade is no longer cyclical but has in fact become structural and endemic.