Two months ago the Australian media, which unlike its US counterpart refuses to be spoon fed ebullient economic propaganda, called bullshit on the spectacular October job numbers, when instead of adding 15,000 jobs as consensus expected, Australia’s Bureau of Statistics reported that a whopping 58,600 jobs had been added.  We covered this in “Australian Media Throws Up All Over ‘Stellar’ Jobs Report: “Don’t Believe The Jobs Figures!”

One month later, the situation got even more ridiculous, when instead of the expected 10,000 drop in November, the “statistical” bureau announced that 71,400 jobs had been added, the most in 15 years, and the equivalent of 1 million jobs added in the US. Once again the local media cried foul as we documented in “Australian Media Throws Up All Over ‘Stellar’ Jobs Report, Again”

Indicatively, for a sense of how grotesque the jobs “data” was, the chart below shows that while the October report was a 6-sigma beat, the November was an even more laughable 8-sigma. 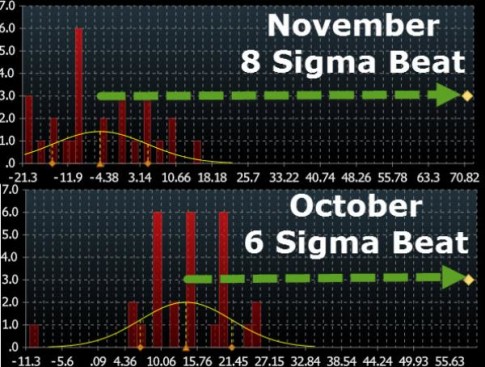 Two months later we find that the media, and all those mocking the government propaganda apparatus, were spot on, because moments ago today, Australia Treasury Secretary John Fraser, during testimony to parliamentary committee, admitted that jobs growth for the two months in question “may be overstated.”  What’s the reason? The same one the propaganda bureau always uses when its lies are exposed: “technical issues”, the same explanation the Atlanta Fed used in its explanation for a strangely belated release of its GDP Now estimate one month ago.

Australia has had some technical issues with its labor data, which “look a little bit better” than would otherwise have been the case, the secretary to the Treasury said, commenting on record employment growth in the final quarter of 2015.

John Fraser, the nation’s top economic bureaucrat, told a parliamentary panel in Canberra Wednesday that he held discussions on the employment figures with the chief statistician this week. He didn’t elaborate on the meeting but said the recent strength in the jobs market is encouraging.

There were some “technical issues” in October and November that may have made the employment figures “look a little bit better than otherwise would be the case,” he said. The technical issues relate to “rolling off” of participants in the labor survey.

Australia’s economy added 55,000 jobs in October and a further 74,900 in November, before shedding 1,000 in December to produce the record quarterly gain. Questions regarding the accuracy of the data have been raised following acknowledgment by the statistics agency in 2014 of measurement challenges.

Why the sudden admission it was all a lie? Simple: weakness in commodity prices “is far greater than people had been expecting,” Fraser said in earlier remarks to the panel. Australia is now “swimming against the tide” because of uncertainties in the global economy, he added.

Translation: “we need more easing, and to do that, the economy has to go from strong to crap.” And with the Australian economy suddenly desperate for lower rates from the RBA, one can ignore the propaganda lies, and focus once again on the far uglier truth.

Which makes us wonder: with the Yellen Fed in desperate need of political cover for relenting on its terrible rate hike strategy, and once again lowering rates to zero or negative, a recession – something JPM hinted at yesterday – will be critical. And what better way to admit the US has been in one for nearly a year than to drastically revise all the exorbitant labor numbers over the past 12 months.

You know, for “technical reasons”…