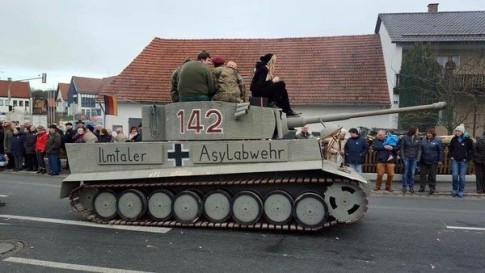 Pictures of a a wood and cardboard mock-up of a Second World War vintage Tiger tank adorned with signs reading ‘Asylum defence’ and ‘Asylum Package III’ taken by police have been passed onto the office of the prosecutor after the float was featured in carnival parades this weekend.

Officers at the scene didn’t prevent the parade from going ahead because although they suspected the satirical float was possibly guilty of acting seditiously, they decided to respect the right of artistic freedom. One of the signs on the tank was a reference to the controversial ‘Asylum Package II’, a new package of government measures designed to give Germany greater control over their borders, but significantly delayed from its planned January implementation date.