5 minutes near this Lake are enough to give you a life-threatening dose of radiation. Who stays for one hour will die. 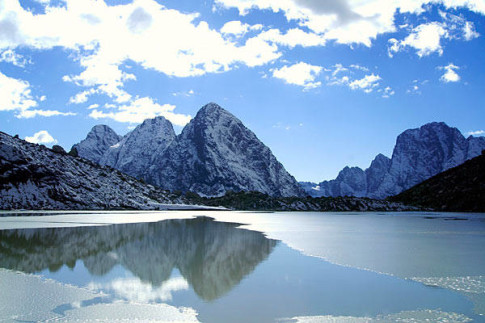 – Nobody likes to swim in a dirty pool. Personally, I don’t like swimming in lakes, streams, or any body of water where you can’t see the bottom. (How would you know if you’re swimming in something gross?):

If you’re a germaphobe, there is one lake where you needn’t worry about swimming in something diseased or slimy. That’s because this lake is so irradiated, every germ in it is probably dead.

Lake Karachay in the Urul Mountains is so polluted with nuclear waste that merely standing next to it for an hour will give you a dose of 600 roentgen (which is enough to kill you at least once). Come on in, the water is deadly!

Some parts of the lake may look deceivingly pretty, but Lake Karachay was the site of many nuclear accidents from the nearby Mayak Production Association nuclear facility. Mayak was one of Russia’s biggest nuclear facilities. Some of the accidents were nearly as devastating as the Chernobyl meltdown in 1986.

To control the nuclear waste that was causing radiation poisoning to the people in nearby towns, the plant began pumping it into huge vats. In 1957, disaster struck. The poorly maintained storage tank full of nuclear waste exploded. The resulting radioactive cloud spread over 9,000 miles. The food supply of 300,000 people was effected.

Original article in German down below.

Lake Karachay in Russia: The most dangerous place in the world

The Lake Karachay in the southern Urals in Russia is considered the most dangerous place in the world: Who spends an hour there who will die. Debt is the secret “Kyshtym disaster”, one of the biggest nuclear disaster in the world. Bad? Make focus is: It gets worse!
At first glance the Karachay Lake in the southern Urals looks like a normal water. But five minutes of his close enough to abzubekommen a life-threatening radioactive radiation.

Who is an hour will die because of the Russian lake is considered, according to the Worldwatch Institute as the most dangerous place in the world -. With the most radioactive contamination.

The region in which the 130,000-square-meter lake lies is affected by a double nuclear disaster. Those of 1957 is considered the third most severe meltdown in history after Chernobyl and Fukushima.

On 29th September 1957 exploded in Majak a steel tank with 80 tons of highly radioactive liquid. The cylinder was two feet below ground in a concrete trough with cooling water.

Massive safe flying across the room

But in the tank ran unnoticed chemical reactions. It emerged substances, which are also used for the manufacture of explosives. Then the cooling failed, the vaporized liquid hazardous.

A defective sensor in a measuring device produced a spark – there was a huge explosion.

Radius of several kilometers shattered by the force of all the windows, in an office on the grounds of a massive vault broke from the wall and flew across the room.

Eyewitnesses later, the sky was blue shone. The radioactive substances, mainly isotope cesium-137 and strontium-90, were thrown by the detonation of b is to a kilometer high in the air.

A total of around 750 million were released Gigabequerel radiant substances. The majority went down directly on the factory premises and in the secret city of Chelyabinsk-40th There lived 20,000 scientists and workers of the nuclear facility.

Because the wind after the disaster blew for days in one direction, the radioactive substances were distributed in a 300 50 kilometers wide area. There then lived 270,000 people.

This strip is now called “Uralspur”. 150 square kilometers of it are restricted and may not be accessed. The level of radioactive contamination there is still hundreds of years continue.

Just ten days after the disaster 1,000 people were evacuated, who lived within a radius of 25 kilometers. In the next two years again to leave their homes around 11,000 people.

To cover up the disaster, the villages were razed to the ground – only the churches stopped.

The Soviets wanted to keep the disaster and its consequences necessarily secret before the world public. This also explains why the military shot on May 1, 1960 from a US reconnaissance plane that was traveling through the region.

Lake is a nuclear waste dump

Pilot Francis Gary Powers was captured and later exchanged in Berlin. His story is told in the movie “Bridge of Spies”, which can currently be seen in theaters.

The lake served but previously for many years as a disposal site for radioactive waste from nuclear weapons production of the Soviets. Heavy contaminated wastewater was simply into the river Techa, which flows into the Karachay. In addition, the radioactive waste from the reprocessing plant Mayak was sunk since the early 1950s, just in barrels in the lake. And these barrels were leaking over time.

The people in the region were completely clueless how extremely dangerous the waters are. They fished fish and ate them bathed in the lake or washing in her laundry.

More and more radioactive material got into the water, in addition to what was already simply tipped into it. But when in 1967 the lake almost completely dried up, radioactive dust was released. The wind spread this around.

Radiation from 200,000 gigabecquerels is comparable to that which had been released in Hiroshima after the atomic bomb “Little Boy”. Blessing in disguise: By default the wind was blowing from the same direction as a decade earlier, the dust landed in the already contaminated Uralspur.

The existence of the reprocessing plant Mayak has long been a secret – and the serious accidents were hushed up until the 1980s. Since the contaminated clouds drifted in a small height above the ground, the gauges suggested Europe not.

Only after the end of the Cold War, the Russian government gave to the accident. Officially upheld the disaster of 1957 but even then the “disaster of Kyshtym”, named after a nearby village.

Many people in the region with leukemia or lung cancer. How many more victims the disaster claimed exactly, is still unknown.

Since the late 1970s the Lake Karachay was filled with concrete to prevent a new terrible misfortune. But the foundation is crumbling now in many places.

Scientists fear that the radioactivity could reach through the groundwater into the Arctic Ocean. So far, that has not yet happened. So far …