“We are in a serious situation and there is a high risk that there could be an attack. But the security agencies, the intelligence services and the police authorities are very alert and our goal is to minimize the risk as best we can.”

That’s from Hans-Georg Maassen head of Germany’s domestic intelligence agency and it certainly doesn’t inspire much in the way of confidence.

In an interview with ZDF television, Maassen said the BfV has “repeatedly seen that terrorists … have slipped into [Germany] camouflaged or disguised as refugees.”

And that’s not mere speculation. “This is a fact that the security agencies are facing,” he added.

According to comments made to the The Berliner Zeitung newspaper, BfV has received “more than 100” tips that there are ISIS fighters embedded among the 1.1 million refugees who streamed across Germany’s borders last year.

The comments come one day after German authorities arrested an Algerian man suspected of training with ISIS in Syria. The suspect, who was staying at a refugee shelter in North Rhine-Westphalia, apparently entered Germany at the Bavarian border last fall.

Several other men – two of whom were detained – with alleged ties to Islamic State were located on Thursday in a series of coordinated raids. Berlin police spokesman Stefan Redlich said they are believed to have been “planning a violent act intended to seriously damage the state.”

“Suspects encountered during a number of police raids conducted in the early morning hours Thursday had allegedly been planning to meet in Berlin to carry out terrorist attacks,” Deutsche Welle writes. “It is not known how close their plans were to completion, but German police said they believed all the suspects had active links to IS.” Here’s more:

Martin Steltner, spokesman for the Berlin prosecutor’s office, declined to comment on any further details from the ongoing police investigation but said that prosecutors were aware of a “concrete” plan to target the capital.

The German newspaper “Bild” meanwhile claimed that the suspects had been plotting to attack Berlin’s Alexanderplatz, a central shopping and entertainment square as well as a major regional transportation hub. Checkpoint Charlie, the former border crossing between East and West Berlin, was discussed as potential target, according to the German dpa news agency.

About 450 officers were deployed in Berlin during the operation, which occurred as parts of Germany started a week of celebrations marking Carnival amid beefed-up security measures. The raids came after a tipoff from Germany’s domestic intelligence agency, the Federal Office for the Protection of the Constitution (BfV), regarding the prospect of a terrorist attack.

A 35-year-old Algerian man apprehended at the refugee shelter in Attendorn is believed to be the head of the terrorist cell. The man had allegedly entered the EU several months ago posing as a refugee. Algerian authorities confirmed they had a warrant for the man’s arrest, accusing him of being a member of the Islamic State terrorist organization, while German authorities added that they had reason to believe the man had attended a militant training camp in Syria.

“Bild” reported that the suspect’s wife and two infant children had also been taken into police custody. Police sources confirmed that a woman had also been detained during the raids, but said she had been arrested in Berlin, not Attendorn. It is unclear whether the woman arrested in Berlin is the wife of the Algerian national detained in Attendorn.

Meanwhile in Berlin, a 49-year-old suspect was also taken into custody. News reports said it was another Algerian national, who was held in custody for having counterfeit identity documents. Two of the four suspects had allegedly sought to pass themselves off as Syrian refugees.

When he was taken from the shelter by police, he had a towel draped over his head. The towel featured smiling orange lions and monkeys. 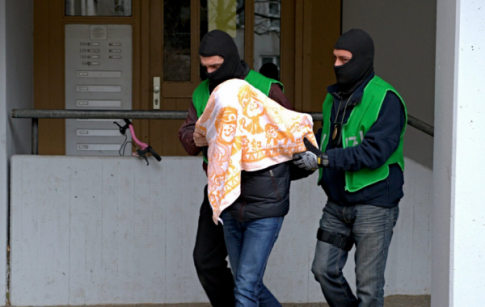 Meanwhile, new testimony from a friend of Hasna Aït Boulahcen, the cousin of Paris attack ringleader Abdelhamid Abaaoud suggests there are “dozens” of ISIS fighters in Europe posing as refugees.

“The woman, who spoke under the pseudonym Sonia, accompanied Mr. Abaaoud’s cousin, Hasna Aït Boulahcen, to a hidden encampment along a highway north of Paris in the days after the attack to meet Mr. Abaaoud,” WSJ writes. “She said Mr. Abaaoud told them that he arrived in Europe without documents, among the refugees, along with 90 other operatives, including French, British, German, Iraqi and Syrian citizens, an official familiar with her.”

Apparently, Abaaoud was planning to enlist Boulahcen’s help in several more attacks including an assault on the La Defense commercial center, police station, and nursery school. “I said to him, ‘You have killed innocent people!’ “He said to me, ‘No, they aren’t innocent. You have to see what’s happening with us in Syria.’ ” the woman said in an interview with RMC radio, her voice disguised.

As for Angela Merkel’s migrant “miracle”, well, it now appears that hugs and selfies has given way to a new strategy: packing 1,000 migrants per day on military planes and dropping them back off where they came from. “German Chancellor Angela Merkel’s government is considering expelling as many as 1,000 rejected asylum seekers per day on military transport planes if refugee influx doesn’t subside,” Bloomberg said, earlier today citing Bild-Zeitung. The flights, Bild says, could start before March 13.

When asked about the plane idea, Merkel’s spokespeson Steffen Seibert said only this: “I have nothing to report on such plans.”