“On Tuesday we got the latest evidence that officials across the globe are preparing to institute a cashless “utopia” when Handelsblatt reported (in a piece called “The Death of Cash”) that the Social Democrats – the junior partner in Angela Merkel’s coalition government – have proposed a €5,000 limit on cash transactions and the elimination of the €500 note. Berlin is using a familiar scapegoat to justify the plan: the need to fight “terrorists” and “foreign criminals.”” 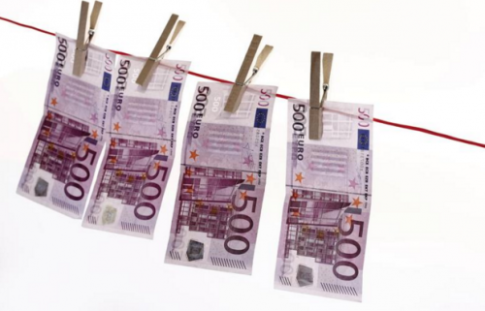 It was just two days ago that Bloomberg implored officials to “bring on a cashless future” in an Op-Ed that calls notes and coins “dirty, dangerous, unwieldy, and expensive.”

You probably never thought of your cash that way, but increasingly, authorities and the powers that be seem determined to lay the groundwork for the abolition of what Bloomberg calls “antiquated” physical money.

We’ve documented the cash ban calls on a number of occasions including, most recently, those that emanated from DNB, Norway’s largest bank where executive Trond Bentestuen said that although “there is approximately 50 billion kroner in circulation, the Norges Bank can only account for 40 percent of its use.”

That, Bentestuen figures, “means that 60 percent of money usage is outside of any control.” “We believe,” he continues, “that is due to under-the-table money and laundering.”

DNB goes on to say that after identifying “many dangers and disadvantages” associated with cash, the bank has “concluded that it should be phased out.”

On Tuesday we got the latest evidence that officials across the globe are preparing to institute a cashless “utopia” when Handelsblatt reported (in a piece called “The Death of Cash) that the Social Democrats – the junior partner in Angela Merkel’s coalition government – have proposed a €5,000 limit on cash transactions and the elimination of the €500 note.

Berlin is using a familiar scapegoat to justify the plan: the need to fight “terrorists” and “foreign criminals.”

“Limits on cash transactions would discourage foreign criminals from coming here to launder money,” says a paper penned by the Social Democrats. “If sums over €5,000 have to pass through traceable bank transactions, laundering would be severely hampered, it adds.”

On Wednesday, we got confirmation of the plan from Deputy Finance Minister Michael Meister who told reporters that Germany is proposing a euroarea ban on cash transactions over €5,000 to combat terrorism financing and money laundering.

“Since money laundering and terrorism financing are cross-border threats,” it makes sense to adopt a bloc-wide “solution”, but “if a European solution isn’t possible, Germany will move ahead on its own,” he added.

This comes at a rather convenient time for policy makers in Europe. Rates are already sitting at -0.30% and are likely to be cut by an additional 10bps in March. But that’s not likely to do anything to curb the disinflationary impulse. Mario Draghi isn’t anywhere close to his inflation target and it says a lot about how ineffective the ECB has been when everyone is relieved to see annual inflation running at the “brisk” pace of 0.4%.

As a reminder, the gradual phasing out of cash strips the public of its economic autonomy. Central bankers can only control interest rates down to a certain “lower bound.” Once negative rates are passed on to depositors – and trust us, that’s coming – people will simply start pulling their money out of the bank. The more negative rates go, the faster those withdrawals will be.

When you ban cash you eliminate this problem. In a cashless society with a government-managed digital currency there is no effective lower bound. If the economy isn’t doing what a bunch of bureaucrats want it to do, they can simply make interest rates deeply negative, forcing would-be savers to become consumers by making them choose between spending or watching as the bank simply confiscates their money in the name of NIRP.

Obviously, banning transactions above €5,000 is a long way from a wholesale ban on cash and several other countries have similar limits on cash transactions. Still, there’s no reason why the same rationale (i.e. fighting terror financing) can’t be applied to smaller sums – or all cash transactions. After all, it’s not as though “foreign criminals” only transact in amounts over €5,000 and since “follow the money” is usually the best way to get to the bottom of a perceived “problem,” having a ledger of everything someone or some group does financially would likely be an effective way to crack down on illicit activity.

We would argue that the cost to society of creating an economy wherein people’s economic decisions are completely dictated by small groups of economists far outweighs any benefits that would accrue from using a centrally planned digital currency to deter crime.

As for how a cash ban would go over in Germany, we seriously doubt the public would take it laying down given that only 18.7% of transactions in the country involve plastic cards.