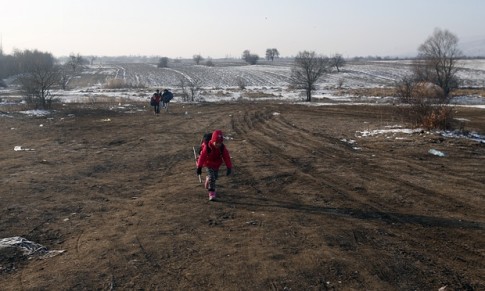 At least 10,000 unaccompanied child refugees have disappeared after arriving in Europe, according to the EU’s criminal intelligence agency. Many are feared to have fallen into the hands of organised trafficking syndicates.

In the first attempt by law enforcement agencies to quantify one of the most worrying aspects of the migrant crisis, Europol’s chief of staff told the Observer that thousands of vulnerable minors had vanished after registering with state authorities.

Brian Donald said 5,000 children had disappeared in Italy alone, while another 1,000 were unaccounted for in Sweden. He warned that a sophisticated pan-European “criminal infrastructure” was now targeting refugees. “It’s not unreasonable to say that we’re looking at 10,000-plus children. Not all of them will be criminally exploited; some might have been passed on to family members. We just don’t know where they are, what they’re doing or whom they are with.”

The plight of unaccompanied child refugees has emerged as one of the most pressing issues in the migrant crisis. Last week it was announced that Britain would accept more unaccompanied minors from Syria and other conflict zones. According to Save the Children, an estimated 26,000 unaccompanied children entered Europe last year. Europol, which has a 900-strong force of intelligence analysts and police liaison officers, believes 27% of the million arrivals in Europe last year were minors.

“Whether they are registered or not, we’re talking about 270,000 children. Not all of those are unaccompanied, but we also have evidence that a large proportion might be,” said Donald, indicating that the 10,000 figure is likely to be a conservative estimate of the actual number of unaccompanied minors who have disappeared since entering Europe.

In October, officials in Trelleborg, southern Sweden, revealed that some 1,000 unaccompanied refugee children who had arrived in the port town over the previous month had gone missing. On Tuesday a separate report, again from Sweden, warned that many unaccompanied refugees vanished and that there was “very little information about what happens after the disappearance”.

In the UK the number of children who disappear soon after arriving as asylum seekers has doubled over the past year, raising fears that they are also being targeted by criminal gangs.

Mariyana Berket, of the Organisation for Security and Cooperation in Europe (OSCE), said: “Unaccompanied minors from regions of conflict are by far the most vulnerable population; those without parental care that have either been sent by their families to get into Europe first and then get the family over, or have fled with other family members.”

Donald confirmed Europol had received evidence some unaccompanied child refugees in Europe had been sexually exploited. In Germany and Hungary, the former a popular destination country for refugees and migrants, with the latter an important transit state, large numbers of criminals had been caught exploiting migrants, he said. “An entire [criminal] infrastructure has developed over the past 18 months around exploiting the migrant flow. There are prisons in Germany and Hungary where the vast majority of people arrested and placed there are in relation to criminal activity surrounding the migrant crisis,” said Donald.

The police agency has also documented a disturbing crossover between organised gangs helping to smuggle refugees into the EU and human-trafficking gangs exploiting them for sex work and slavery. He said that longstanding criminal gangs known to be involved in human trafficking, whose identity had been logged in the agency’s Phoenix database, were now being caught exploiting refugees.

“The ones who have been active in human smuggling are now appearing in our files in relation to migrant smuggling,” said Donald.

Europol will take evidence from organisations working on the Balkans route, which requested a meeting with the law enforcement agency specifically to discuss children vanishing. “Their concern is in relation to the number of unaccompanied minors. They’re asking for help in identifying how these children are identified and then brought into the criminal infrastructure. They’re dealing with this on a daily basis, they’ve come to us because they see it as a big problem.” He warned the public to be vigilant, stating that most child refugees who had gone missing would be hiding in plain sight. “These kids are in the community, if they’re being abused it’s in the community. They’re not being spirited away and held in the middle of forests, though I suspect some might be, they’re in the community – they’re visible. As a population we need to be alert to this.”

Europe’s chaotic approach to the migration crisis led last week to calls for Greece to be removed from the open-borders Schengen zone, a development that a senior UN official has described as a “new nadir” in the EU’s approach.

Writing in the Observer, the UN special representative on migration, Peter Sutherland, said such a move would “effectively transform it [Greece] into an open-air holding pen for countless thousands of asylum seekers. The idea is inhumane and a gross violation of basic European principles”.