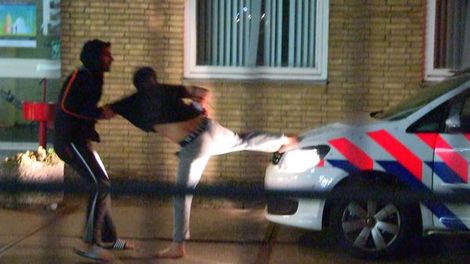 ZAANDAM – Dozens of residents of the refugee center in Zaandam turned last night against paramedics and police. The reason for the violence was a suicide attempt by an applicant.

According Noordhollands Dagblad the ambulance crew was called because an applicant had injured himself with a large knife. To treat him the brothers wanted to bring the man to the ambulance, but the residents wanted to do this myself against the wishes of the ambulance personnel. It got out of hand, when the police became involved.

The injured inmate protested against itself properly and because the situation threatened to escalate, paramedics and officers decided to retreat. About 15 officers then tried the injured asylum seekers by police to transport to the hospital.

According to some residents, the refugees tried to take his own life out of dissatisfaction with the conditions in the refugee center. So he would get bad to eat and sleep only.

Due to the problems the police arrested a resident, but which is now back on the loose.

Asylum centers in Zaandam is located almost a year in the former ‘prison ships. “