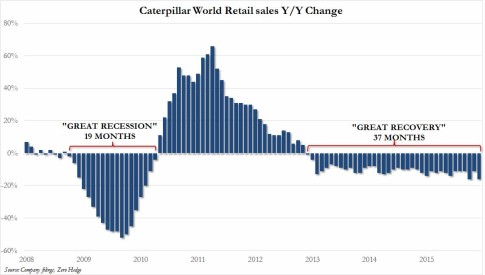 Moments ago Caterpillar reported its latest monthly retail sales statistics and the numbers have never been worse.

Not only is the fourth, feeble and final dead CAT bounce in US sales officially over, with December US retail sales tumbling -10% Y/Y, after “only” a -5% decline in November and hugging the flatline for the past few months, but sales elsewhere around the globe were a complete debacle: Asia/Pacific (mostly China) was down -21%, EAME dropping -12%, and Latin America (i.e. Brazil) continuing its free fall dropping by -36%, but global retail sales just posted a massive -16% drop in the past month, tied for the worst annual decline since the financial crisis. 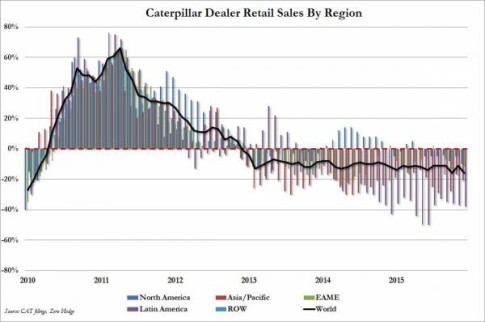 But where the manufacturing depression as seen from the perspective of heavy indsutrial machinery operator has never been worse is shown in the chart below: CAT has now suffered a record 37 months, or over 3 years, of consecutive declining annual retail sales – something unprecedented in company history, and set to surpass the “only” 19 months of decling during the great financial crisis by a factor of two in January!

Perhaps while debating whether the US is or is not in a recession, one should also ask how much worse the global industrial depression will get?