– “Zombie Ships” – Why Global Shipping Is Even Worse Than The Baltic Dry Suggests:

One glance at The Baltic Dry Index’s collapse is all that most need to see the painful state of the global shipping industry. However, as gCaptain reports, reality is even worse as the boom in so-called “zombie ships” suggests there is no recovery in sight for the beleaguered containership charter market, which is facing its biggest crisis since the 2008 financial crash. 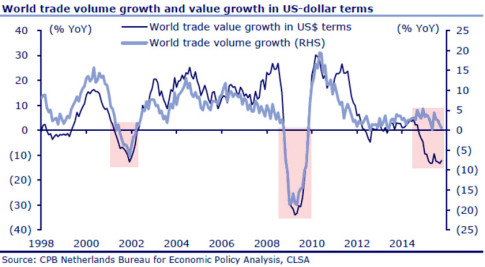 But, as gCaptain details, reality is even worse for the world’s shipping industry…

Analysts agree there is no recovery in sight for the beleaguered containership charter market, which is facing its biggest crisis since the 2008 financial crash.

However, unlike that bleak period for shipping, which ultimately resulted in a strong recovery for charter rates, this time the fundamentals are quite different.

Overcapacity, stemming from the ordering strategy of carriers has been exacerbated by a growth slowdown in China and ultra-low oil prices. And according to the latest report from Alphaliner, with the possible exception of very small feeders, all containership sectors are struggling badly, with owners obliged to accept sub-economic charter rates and pay for positioning costs just to keep their ships busy.

The revenue earned in charter hire is seen by owners as a “contribution” to vessel overheads, but is often insufficient to cover mortgage payments on the ship.

Thus “zombie ships”, as they have become known in shipbroking circles, are masking the perilous state of container shipping.

Commentators generally point to laid-up tonnage and ship deletions as health barometers of the industry, but in the past year, these have proved to be less than reliable as indicators. Despite chronic overcapacity and weak demand the number of laid-up containerships has only inched up relatively, with Alphaliner’s idle tonnage register at 11 January reflecting a net increase of just six ships in the previous two weeks.

In fact, the total number of idled ships, 337 (1.35m teu), represents only 6.8% of the world’s cellular fleet; a figure that is clearly artificially low given current industry fundamentals.

While some smaller ships were added to the laid-up fleet during the period, Alphaliner notes that several ships of 7,500 teu and above were returned to service ahead of the Chinese New Year holiday, albeit that after the peak pre-CNY weeks these ships are again likely to become surplus to carrier requirements.

As we noted previously, given these trends, the crummy performance of our heavily internationalized revenue-challenged corporate heroes is starting to make sense: it’s tough out there.

And further, as the baltic dry index continues to plumb new record lows, how long until central banks realize that for all their omnipotence and all their attempts to restore growth, inflation and the “wealth effect” they never mastered the only thing worth printing in a globalized world: printing trade?