Reader U.W. says this article has been censored in Thailand.

The NYT edition in Thailand had a blank white spot, where the article should have been. 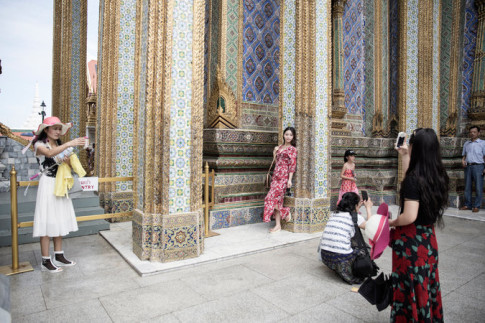 – Thai Economy and Spirits Are Sagging:

BANGKOK — Do not be fooled by the throngs of Chinese tourists clogging the entrance to the gilded Grand Palace, the roads buzzing with traffic or the plastic smiles of hostesses greeting the business lunch crowd at luxury hotels.

Thailand is in a rut.

The economy is moribund and Thai households are among the most indebted in Asia.

King Bhumibol Adulyadej, the epoxy of a fractured nation who commands divine-like reverence and turns 88 next month, is ailing and has not been seen in public since September.

A military government that seized power last year is showing no haste in handing back power to politicians who have spent the past decade in often violent conflict.

“No one feels like smiling anymore,” said Sompetch Pimsri, a merchant at a fruit and vegetable market behind the Temple of Dawn, a tourist landmark along the Chao Phraya River. “Life is so stressful. I don’t know how to explain it, but it feels like nothing is working in Thailand anymore.”

Thailand was once the torchbearer of freedom and prosperity in Southeast Asia — a center of commerce for Indochina, a bastion of free expression and a home for refugees from neighboring countries, which for years Thais saw as war-ravaged basket cases.

But these days when Thais look to their neighbors, they feel envy, not pity.

To the west, there are signs of a blossoming democracy in Myanmar after the victory of the Nobel Peace laureate Daw Aung San Suu Kyi over the military establishment that oppressed her for years. To the east the economies of Laos, Cambodia and Vietnam are showing signs of vigor and luring foreign investors away from Thailand.

“We are moving backward, and they are running ahead of us,” said Samorn Thurapan, a 51-year-old noodle seller who roams the streets of Bangkok on a motor scooter attached to a food cart.

A popular Thai radio host recently told his listeners that the only way to feel better about the country was to leave it. Take a vacation abroad, said Vera Theerapat, the host.

Mr. Vera said he sought “sage advice” about the country’s straits from the smartest people he knew. “They all shake their heads,” he said.

“I am not sure if I can take it any more,” he said on his program, adding that he was considering emigrating.

By no means is Thailand lifeless. The wealthy parts of Bangkok, including the main shopping and business districts, are still jammed, with Thais and tourists. The well-heeled and well-entrenched elites are insulated from the downturn and on some nights still fill restaurants with laughter and cheer. But gone is the notion of a Teflon Thailand, the country that could continue to prosper despite political dysfunction.

The deputy prime minister, a marketing specialist appointed by the junta in August as part of an effort to revive the economy, acknowledges the country’s sour mood.

“People feel dismal,” the minister, Somkid Jatusripitak, said at a conference this month. He compared the country to “a sick person standing in a cold wind.”

Thailand’s malaise set in after nearly a decade of political turmoil. In late 2013, a protest movement led by the country’s elites took to the streets to demand the suspension of electoral democracy. The military obliged, taking power from an elected government in May 2014.

Immediately after the coup, Thais of various political persuasions said they felt a sense of relief that months of protests and street violence were over.

But military rule now seems indefinite and the army seems mostly preoccupied by its critics, detaining professors, politicians, journalists and students and subjecting them to what the junta calls “attitude adjustment,” which often entails signing an agreement that allows the military to seize assets if the detainee criticizes the junta.

The leader of the junta, Gen. Prayuth Chan-ocha, stunned many Thais when he said in a nationally televised address in October that he might be forced to “close the country.” He retracted the comment after an outcry by Thais and puzzlement by foreign businesses.

Around the same time, the Thai news media reported that the government had approved plans to route all Internet traffic in and out of the country through a “single gateway,” effectively giving the military government control over the flow. After another outcry, the junta played down the plan, but it has not rescinded it.

On social media, Thais lament that the country feels directionless. But privately they also report being fearful. At least three people arrested on the criminal charge of insulting the monarchy have died in custody since the junta came to power. The government has given only oblique accounts of these deaths, saying the men died from suicide or illness. In each case, the body was cremated before an inquest could take place.

Some of those who died had connections to Crown Prince Vajiralongkorn, who is much less popular than his father, the ailing king. The mysterious deaths have only added to apprehensions about the looming succession.

Thais are also increasingly fearful of crime. Military rule has somewhat paradoxically coincided with a surge in thefts, burglaries and robberies. The national police recorded more than 75,557 thefts and other property crimes in the fiscal year that ended in September, 10.5 percent higher than the previous fiscal year.

Violent crime was up 8.6 percent during the same period.

Samorn Thurapan, the noodle seller, says the bad economy has made people more hot-tempered. “People are quick to start fights,” he said. “Buddhist teachings are not restraining them anymore. The bad economy has turned everything upside down.”

The economy more than perhaps anything else is a daily preoccupation, especially among the traders and unregistered workers, a group that economists call the “informal” sector and that makes up two-thirds of the work force. At the fruit and vegetable market, vendors say their customers are not in the mood to spend anymore.

Loan sharks charging interest rates of 20 percent a month walk through the market each morning to collect debts.

Yet even the loan sharks are complaining. One, who gave his name as K. Singh, said the poor economy meant people borrow and cannot pay back.

“They close their shops and say bye-bye,” he said. “And we are never able to find them.”

In a wholesale clothing district of Bangkok, many shops are for sale or going out of business, says Thongyoy Phaesuwan, 29, the owner of a clothing business. Her buyers have become cautious and frugal.

“It’s as if people are swarming to eat the tiny bits of meat left on a fish bone,” she said. “It used to be a big fish, but today there are only scraps left.”

The military has been focused on bringing order to a famously disordered society. But Ms. Thongyoy faults the junta for its management of the economy.

“I am not dreaming about an ideal government,” she said. “We just want to survive.”

Correction: December 17, 2015
The Memo From Thailand article on Nov. 30, about a widespread feeling of malaise in the country, using information from the Thai national police department, misstated the percentage increase in crime in Thailand during the fiscal year that ended in September. The increase in property crime from the previous fiscal year was 10.5 percent, not 63 percent, and the increase in violent crime was 8.6 percent, not 17 percent. (The police say they changed their methodology for reporting such crimes between 2014 and 2015; the new figures take account of that change.)