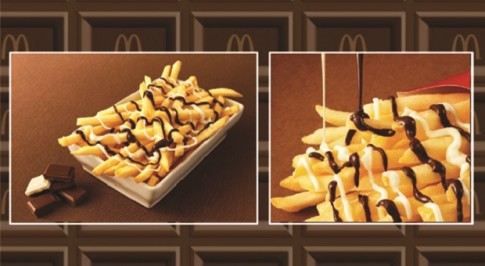 Tokyo, Japan — Fast food giant McDonald’s has been having a rough time. Considering its recent decision to close 700 locations in 2015, dire predictions from franchise owners claiming the company is facing its “final days,” and a June announcement that the company was shrinking for the first time in its long history, it’s safe to say McD’s is looking for something — anything — to turn its struggling business around.

The advertising geniuses at McDonald’s may have found that interesting, albeit disturbing something. McDonald’s unveiled its new McChoco Potato yesterday, a spin on the classic fries, which will be drizzled with chocolate and white chocolate syrup. The company says “The combination creates a wonderful salty and sweet harmonious taste.” McChoco fries will be rolled out in Japan starting January 26th, and if they are a hit, it’s possible they will eventually be sold in the United States.

McChoco fries are just the company’s latest attempt to win back the hearts and stomachs of young fast food customers, who are flocking to alternatives for healthier, fresher options. Only several months ago, the company announced it would sell breakfast all day, a decision that received mixed reviews from both consumers and franchisees. In 2014, responding to market pressures, the fast food giant even tossed around the idea of providing organic food in its restaurants — though that scheme is yet to be implemented.

Franchise owners have complained about McDonald’s corporate leadership and the recent spike in short-term marketing schemes. As one local owner said, “The lack of consistent leadership from Oak Brook is frightening, we continue to jump from one failed initiative to another.”

Global economic trends, as well as consumer preferences, seem to be the driving force behind McDonald’s decline and increasingly strange marketing plots. As Anti-Media reported in June:

“Though the chain has dominated the fast food market for decades, recent competition and health consciousness has challenged the popularity of its product. The growth of chains like Chipotle, which recently stopped using genetically modified ingredients, has reportedly diverted customers away from McDonald’s.

Additionally, the company is losing a share of its young patrons while the rise of boutique burger chains, such as Five Guys, has put a dent in profits.”

McDonald’s did make some small gains toward the end of 2015, with food sales increasing nearly one percent. CEO Steve Easterbrook attributed the growth to a “stream of initiatives—from curbing antibiotics use in its chicken supply to creating a new global corporate structure […],” though it appears long-term trends in changing consumer preferences threaten continued profits.

While McDonald’s McChoco fries are unlikely to bring the company back from its overall, years-long downturn, these increasingly strange marketing attempts reveal the company’s desperation to find its place in the ever-changing food economy.