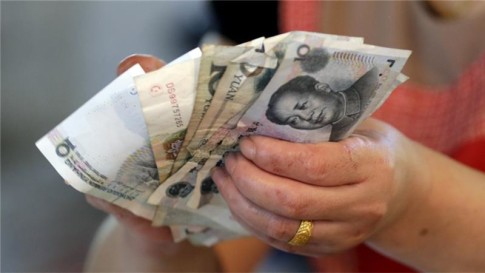 A vendor holds Chinese Yuan notes at a market in Beijing

China’s new year headlines are all about the economy. Official plans call for slower growth in 2016 and beyond, with the 7.5 percent growth target reduced to 6.5 percent. A run of poor results in the manufacturing sector calls even that more modest target into question.

China’s ultimate slowdown, once barely visible over the horizon, has now arrived. The era of easy growth based on China’s reintegration into the global economy is now over.

Comparisons with Japan, Taiwan, and South Korea are inevitable. As these countries caught up with Western Europe and North America, their growth slowed, too. And just like these rich Asian democracies, China now has a declining birth rate and a rapidly aging population. The big worry in the big four countries of northeast Asia is no longer overpopulation: It’s how to pay for eldercare.

The difference between China and the other countries of northeast Asia is that China is still relatively poor. China still lags well behind Mexico in gross domestic product (GDP) per capita, according to IMF estimates for 2015.

China’s GDP per capita of $8,280 is roughly one-third of South Korea’s and one-quarter of Japan’s. Adjusting for China’s low cost of living doesn’t change the overall picture.

As a result, China is now facing rich country problems on a poor country budget. China’s growing population of retirees is being supported by a shrinking number of workers. China’s people are demanding increased access to education. And of course China faces prodigious environmental challenges, starting with the poisonous smog that confronts Beijing’s leaders every time they look out the window.

To address these problems, China has committed to massive expansions in social security, education, and healthcare. President Xi Jinping has pledged to end poverty in China by 2020.

By that same year, China plans to upgrade all of its coal-fired power plants to higher environmental standards, or close them down. And all of these initiatives come in the midst of a major military buildup that includes the construction of China’s first home-built aircraft carrier.

It doesn’t take an advanced degree in mathematics to figure out that if budget commitments are growing at double-digit rates while the economy is growing at single-digit rates, something has to give. That something is the fiscal deficit. China is going into debt – in a serious way.

Officially, the Chinese government expects a budget deficit of “three percent or higher” in 2016. How much higher is anyone’s guess. An inside source quoted by Reuters suggests that the budget deficit might continue to rise even higher in future years.

For comparison, budget deficits of three percent of the GDP are the largest allowed under the European Union’s Stability and Growth Pact rules, though many European countries have broken that limit.

Japan routinely runs large budget deficits. The United States ran budget deficits of eight to nine percent of the GDP in the wake of the 2008 crisis, though these have now come down to under three percent.

So a three percent budget deficit is not in itself catastrophic. As with social commitments, the difference again is that the US, Europe, and Japan are all very rich. China is still poorer than Mexico, Russia, or even Brazil.

Rich countries have ample fiscal tools for handling budget deficits. The US budget deficit reached a high of 9.8 percent of GDP in 2009. Five years later, it had fallen to just 2.1 percent.

Despite a famously paralysed political system, the US still had the budgetary flexibility to handle the massive shock of the Global Financial Crisis.

China has nowhere near the fiscal sophistication of the US. China’s tax revenues are rigidly tied to economic growth: It relies heavily on inflexible taxes that grow at the same rate as the economy as a whole. That was fine when the economy was growing at 10 percent every year. Now it may be more of a problem.

What China does have is $3.4 trillion in foreign currency reserves, most of it in US dollars. That sounds like a lot of money, until you account for the fact that China’s currency reserves fell by $409bn (more than 10 percent) in the 12 months through November 2015. China’s reserves are now 35 percent of the GDP and falling rapidly.

These reserves are large but not inexhaustible. Given the scale of China’s international commitments – for the New Silk Road, the Asian Infrastructure Investment Bank, the New Development Bank (BRICS bank), bilateral aid to African countries, and more – China is not as flush with cash at is may seem. And China’s summer stock market turmoil showed how quickly a large cash pile can disappear.

China is not in any immanent danger of default, despite scares over the banking sector and local government debt. What China faces is the same kind of long-term fiscal paralysis that plagues almost every other middle-income country.

Over the next five years the Chinese government will go from being cash-rich to cash-poor. As it does, it will find it more and more difficult to deliver on the grandiose commitments it is making in its latest five-year plan.

With good management and good luck, China’s looming fiscal crisis will unfold in slow motion – not in a big bang. No one wants a crash in China, least of all China. But the fiscal crisis of the Chinese state is coming either way. Expect to see a less ambitious, more modest China emerge in its aftermath.